Thousands march for independence in Catalonia 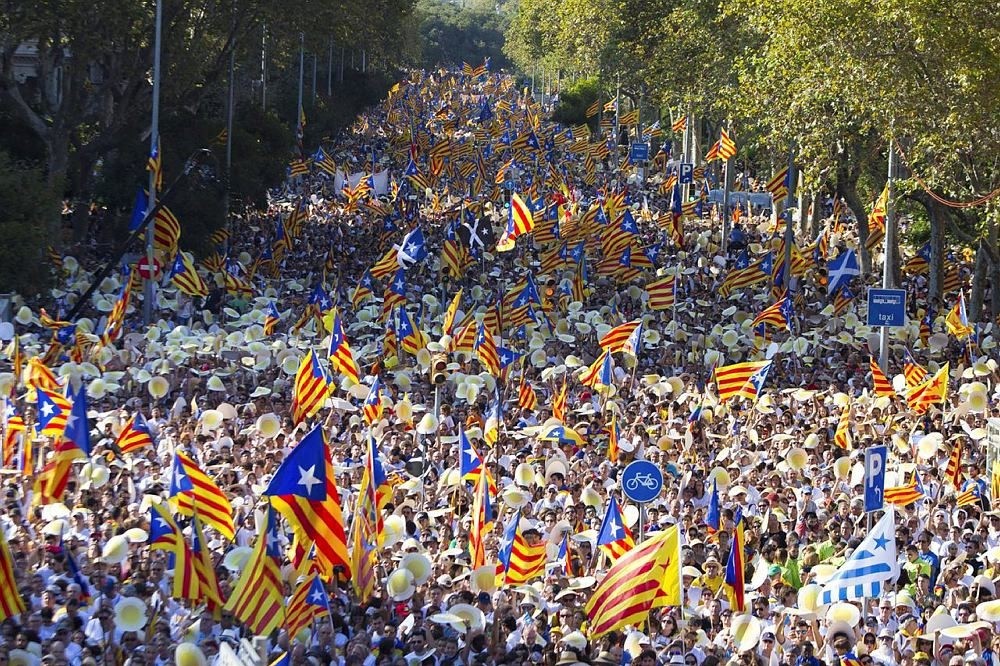 They were also demanding a binding referendum on the question of independence.

"So no one else will ever dare to doubt Catalonia. They want us separated, tired and defeated. But we will never surrender," declared Jordi Cuixart, president of a Catalan cultural association, to the massive, cheering crowd waving hundreds of estelada flags in Barcelona, as shown on a live stream on the El Pais website.

On Twitter, Barcelona police said they estimated that 540,000 people participated in the protest in the region's capital city alone.

This holiday, also known as "La Diada" (the day in Catalan) commemorates the fall of Barcelona to Spanish forces during the War of Succession on Sept. 11, 1714. This defeat led to more centralized Spanish rule, the dissolution of autonomous Catalan institutions and the removal of Catalan as an official language, according to local media.

Organizers are calling this Sunday's march a "historic event", according to local media. It marks the first time that those marching for independence have been blatantly backed by the Catalonian government, which is in the middle of a process that separatists hope will lead to an independent "Republic of Catalonia".

"We are convinced that this is the last Diada before the independence of our country," Oriol Junqueras, vice president of Catalonia, told media on Sunday.

Earlier in the day, the president of the region, Carles Puigdemont held a press conference for the international press to outline how he hopes his region will gain independence by 2017.

"On the 28th of September I will insist on suggesting [to hold a binding referendum in Catalonia] since it is a possibility which shouldn't be dismissed," he announced.

However, Madrid has repeatedly denied the wealthy northeastern region a referendum similar to that of Scotland in the U.K. or Quebec in Canada.

Chances that the central government will change its mind is unlikely. Spain has gone nearly nine months without a functioning government and three of the four largest parties in Spanish congress oppose granting Catalonia a referendum —far-left Podemos is the only exception.

Even without the permission of Madrid, Catalonia has been working on a process of "disconnection"—which includes drafting laws about social security, taxes and transitional jurisprudence—since separatists won a majority in regional elections last September.

Puigdemont predicted on Sunday that by the end of July, 2017, the Catalan parliament will have finished its task of preparing the region to split and hopes to hold new elections before September of that year.

"You can come out of a crisis or get over a terrorist attack, but the dissolution of Spain is absolutely irreversible," he said.