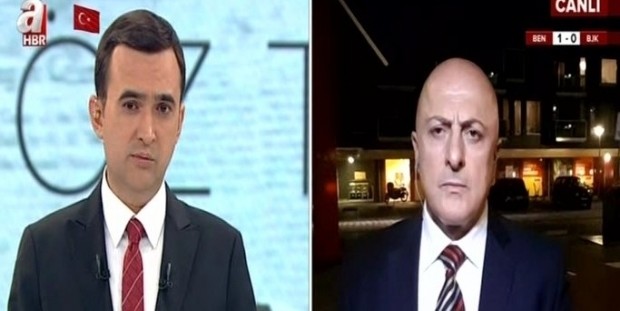 Fatih Özyar, a Turkish journalist, was detained by police on Monday night for covering a protest in Zaandam, a city in the Netherlands, which ranks high among countries in terms of press freedom

A Turkish journalist was detained by Dutch police for what he claimed was simply covering the arrest of a group of demonstrators in Zaandam. Fatih Özyar's detention, for which he was not given a reason other than being at the site of an unauthorized rally, raises questions about the state of press freedom in the Netherlands, which is named "one of the freest environments in the world for the media" by press freedom watchdog Freedom House.

Fatih Özyar, working for Istanbul-based A Haber TV, a sister media company of Daily Sabah, rushed to an area where a group of young protesters, mostly of Turkish origin, was staging a protest over unfair treatment when he heard the police was detaining the demonstrators. According to his statement after he was released following a 15-hour detention, Özyar said police kept him in detention although he showed them his press card and told them he was simply there to cover the protest described as an unauthorized assembly by Dutch authorities.

He said police shoved him while he was recording a video of the arrest of a youth, and four police officers "roughly" handcuffed him, in a statement on his social media account. "I was thrown into jail and only 15 hours later, they asked me if I would give a testimony. I rejected giving a testimony and they told me I could be sentenced for ignoring a police warning to leave (the site of the protest)," Özyar said.

The demonstration Özyar was covering when he was detained was the latest in a series of protests by a group of Dutch youths of Turkish and Moroccan origin. İsmail İlgun, a 19-year-old Dutch video blogger of Turkish origin was among the organizers of the protests and was the only one arrested by police while eight others were later released after a brief detention. İlgun and his group of friends were portrayed as supporters of President Recep Tayyip Erdoğan by the Dutch media, which published a string of reports critical of the protests.

Speaking to A Haber after his release, Fatih Özyar said he was openly targeted by police. "I showed them my press card but they told me 'this is the Netherlands' and took me into custody," he said.

Dutch authorities were silent on the detention of Özyar who criticized the police's decision to detain the youth in a Facebook rant. "Since when was the Netherlands view of one's admiration for his/her country of origin a crime? I wonder if these detentions aim to intimidate the public," he said. Özyar also criticized the Dutch media for not mentioning his detention as a journalist while reporting on the detentions in Zaandam's Poelenburg neighborhood. "Press freedom should not be a privilege exclusive only to (Dutch media). You have to give this freedom to others as well," he concluded.

The incident comes a few weeks after Turkey criticized the remarks by Dutch Prime Minister Mark Rutte who called for "Turks unable to integrate to go back to Turkey" after a Turkish citizen attacked a Dutch reporter in July in Rotterdam during a protest. The Foreign Ministry accused Rutte of using an isolated incident and turning it into a precedent about Turkish people living in the Netherlands "in a time where xenophobic statements and attacks are on the rise."