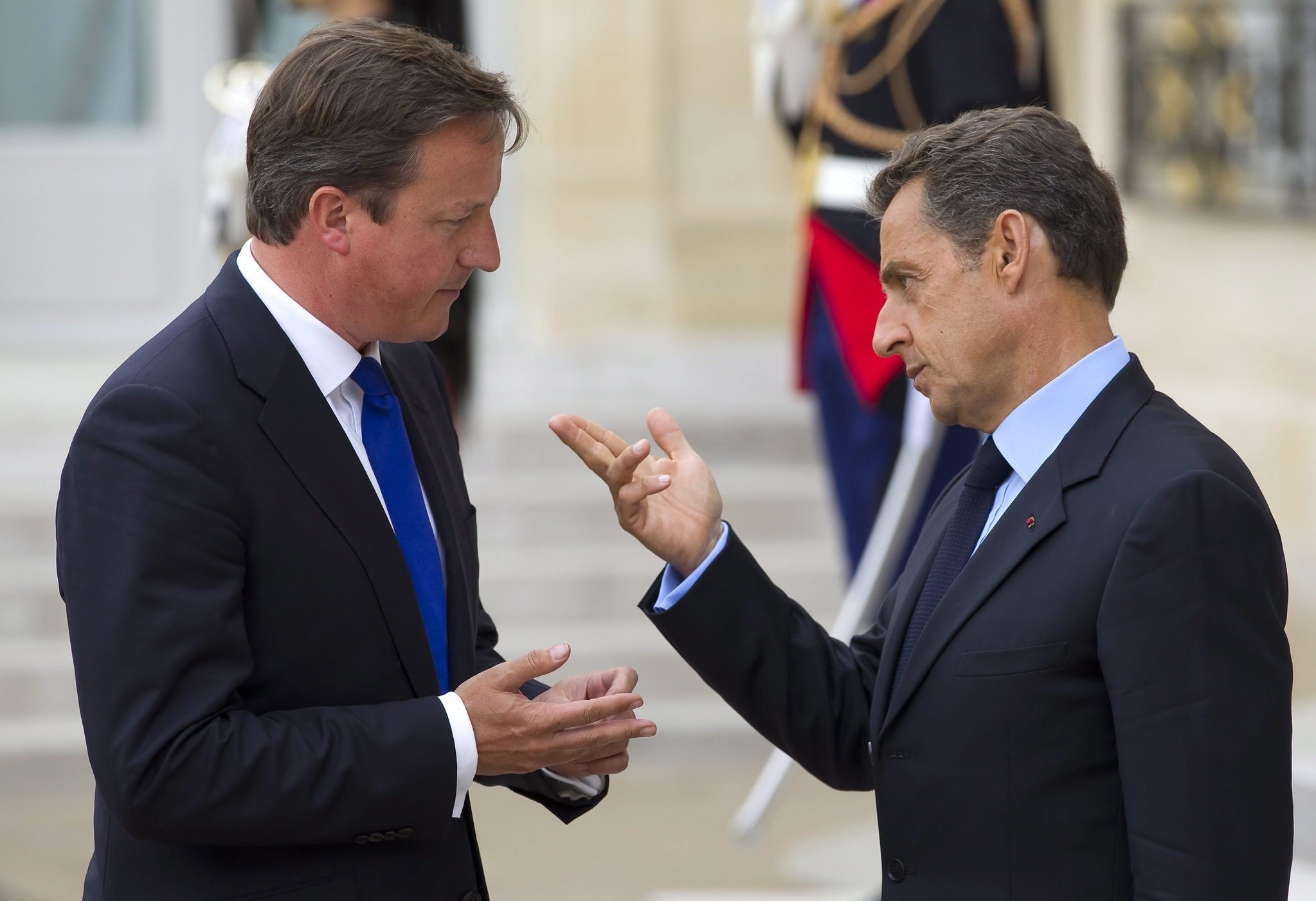 French President Nicolas Sarkozy (R) and Britain's Prime Minister David Cameron (L) before a conference on Libya at the Elysee Palace in Paris, France. (EPA Photo)
by Sep 14, 2016 12:00 am

Former British prime minister David Cameron launched a bombing campaign in Libya based on "erroneous assumptions" and failed to adequately plan for the aftermath, according to a damning parliamentary report released on Wednesday.

The Foreign Affairs Committee analysed Britain's decision-making in the run up to its intervention alongside France in 2011, which the government said at the time was aimed at protecting civilians under fire from dictator Moamer Kadhafi.

"It (the government) could not verify the actual threat to civilians posed by the Gaddafi (Kadhafi) regime; it selectively took elements of Muammar Gaddafi's rhetoric at face value; and it failed to identify the militant extremist element in the rebellion," lawmakers said in their report.

"UK strategy was founded on erroneous assumptions and an incomplete understanding of the evidence," the report added.

Nearly five years after Kadhafi was ousted and killed, chaos continues to reign in Libya with two rival governments vying for power and fierce battles over the country's valuable oil assets.

Crispin Blunt, chair of the Foreign Affairs Committee, said other options were available to Britain which could have led to a better outcome.

"Political engagement might have delivered civilian protection, regime change and reform at a lesser cost to the UK and Libya.

"The UK would have lost nothing by trying these instead of focusing exclusively on regime change by military means," he said in a statement.

The report also said the government should have been aware that militant extremist groups would attempt to benefit from the rebellion, adding there was no evidence a proper analysis of those behind the rebellion was carried out.

Cameron was described by the committee as "ultimately responsible for the failure to develop a coherent Libya strategy".

The former prime minister declined to give evidence to the committee, citing "the pressures on his diary", according to the report.

Blair told the committee he spoke to Kadhafi by phone in February 2011 and tried to convince him to stand aside. "We saw no evidence that the then Prime Minister David Cameron attempted to exploit Mr Blair's contacts," the report said.

The fallout from the ousting of Kadhafi has also seen criticism of US government policy, with President Obama admitting in a candid interview with Atlantic magazine published in March that Libya was a "mess."

He said Cameron became "distracted" after the 2011 intervention and said he had placed too much faith in the Europeans, including then French president Nicolas Sarkozy, "being invested in the follow-up."

Intervention came after Kadhafi loyalists pounded the eastern city of Benghazi, raising fears of an imminent massacre in the rebel stronghold.

A UN Security Council resolution with Arab backing authorised the use of "all necessary means" to protect civilians and enforce a ceasefire and no-fly zone against Kadhafi's forces.