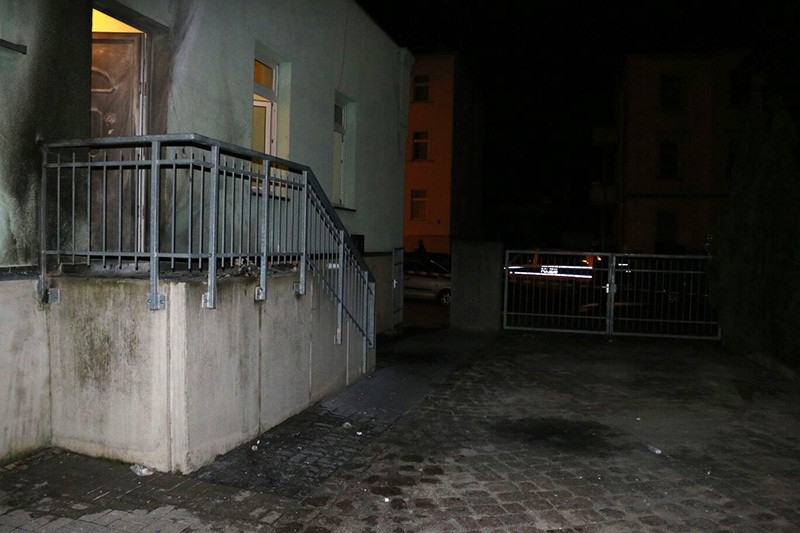 A few days after a mosque in Germany's Hessen was firebombed, another worshipping place, again, run by a Turkish association, came under attack on Monday night, this time in Dresden, a hotbed of racist attacks and home to an Islamophobic movement.

"It was a loud explosion," Mahmut Bacaru, who heads the association maintaining Fatih Mosque, told Anadolu Agency. The mosque in the state of Saxony was built by the Turkish-Islamic Union for Religious Affairs (DİTİB), a Turkish nongovernmental organization overseeing several mosques across the country. Bacaru said the explosion stemmed from an inflammable liquid or explosive device and security camera footage showed a suspect placing an object resembling a gas canister in front of lodgings for the mosque's imam and his family. No one was hurt in the explosion that triggered a fire. Firefighters put out the flames while police launched an investigation into the incident that was followed by a similar attack at the International Congress Center, a main event venue in the city.

Dresden police said the attack damaged the mosque's door and initial findings indicated a home-made explosive was used in the attack. Dresden police chief Horst Kretschmar said they believed the attacks on the mosque and congress center were linked and though no one claimed responsibility, the attack might be linked to xenophobia. Kretschmar said police officers would be deployed outside the mosque. Ahmet Başar Şen, Turkey's consul-general in Berlin visited the mosque following the attack and said he was happy that no one was hurt in the attack. Şen said they asked German authorities to look into all aspects of the "deplorable" attack and he hoped perpetrators would be captured soon. Meanwhile, eyewitnesses said a suspect riding a motorcycle fled the scene after the attack, according to an account in Anadolu Agency.

The attack follows the firebombing of Mimar Sinan Mosque in Hessen over the weekend. Unidentified suspects hurled Molotov cocktails in the non-lethal attack targeting the DİTİB-run mosque in the city of Bebra.

The incidents come in the wake of what the DİTİB has claimed a defamation campaign by German politicians. The DİTİB was critical of the statements "that amount to outright hostility" after three politicians from different political parties claimed the association was under the influence of the Turkish government and therefore, should not be allowed to shape Islamic religious education in Germany.

Mosques in Germany, where anti-Muslim sentiment accompanying the influx of Muslim refugees rises, are occasionally subject to attacks, ranging from Molotov cocktails to tossing of pig's heads. A Turkish parliamentary committee investigating the targeting of mosques found some 297 attacks against mosques between 2001 and 2014 and they mostly targeted Turkish mosques.

Dresden is the state capital of Saxony where racist attacks are on the rise. It is also home of PEGIDA, an Islamophobic movement founded in the city in 2014 that organized rallies attracting thousands of supporters of Islamophobia and xenophobia.

Several European countries have witnessed a spike in Islamophobia and anti-migrant sentiment, especially after an unprecedented influx of refugees, who are mostly Syrians fleeing war and violence. Europe's populist right also rushed to demand an end to the influx of refugees from the Middle East in the wake of the attacks.