Hungary’s migrant referendum: A test of the EU's future 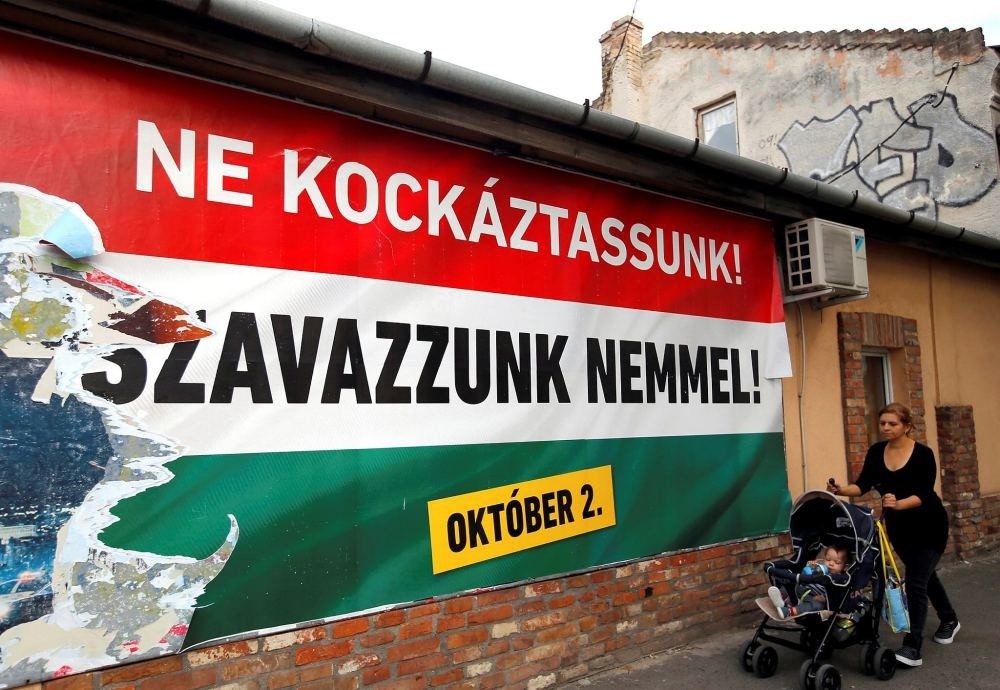 A woman pushes a stroller with her child in front of the Hungarian governmentu2019s poster in Budapest, Hungary, Sept. 28. The poster reads: u201cWe should not take a risk, vote no (to refugees).u201d (REUTERS Photo)
by Compiled from Wire Services Oct 01, 2016 12:00 am

As Europe is hit by growing anti-migrant nationalism, Hungarian Prime Minister Viktor Orban's referendum on Sunday will test whether the EU will be harmed over mandatory immigrant quotas

Hungarians will cast their votes on the European Union's troubled refugee quota plan in a referendum on Sunday as fiercely anti-migrant Prime Minister Viktor Orban rides a populist wave not only in the country itself, but in the whole EU. The question posed by Prime Minister Viktor Orban's right-wing government to 8 million voters is, "Do you want the European Union to be able to mandate the obligatory resettlement of non-Hungarian citizens into Hungary even without the approval of the [Hungarian parliament]?"

The referendum concerns whether Hungary will accept one of the EU's main responses to shouldering the influx of immigrants via mandatory quotas. Viktor Orban is backing a "no" vote and is almost certain to win. His vote further inflaming tensions with his western-European partners which have heavily criticized his hard-line anti-immigrant nationalism.

Amid the wave of anti-immigrant sentiments ridden by Orban's government, the vast majority of Hungarians believe that a new immigration wave could hit Europe leading to future terrorist attacks. According to a survey conducted by the Nézőpont Institute, 89 percent of those surveyed are concerned about potential terrorist attacks in Europe due to the massive influx of refugees. The survey also revealed that concern over terrorism in general was equally high.

Viktor Orban is considered to be Europe's standard go-to for the swelling opposition to German Chancellor Angela Merkel's "open-door" policy as the continent grapples with its biggest immigration influx since World War II.

Nicknamed "Viktator," Orban has sealed Hungary's borders with barbed wire fences that his younger self had fought to tear down. On Sunday he hopes to boost his growing clout with a national vote aimed at rejecting the EU's troubled migrant quota plan.

"Europe is again under attack... We may one morning wake up and realize that we are in the minority," he thundered last autumn, as hundreds of thousands of people fleeing war and poverty trekked north in search of a new life in wealthy EU nations.

Declaring Hungary a defender of the "European Christian identity," the father-of-five recently warned immigration was a "poison" that brought "terrorism" and crime into the block.

Billboards around the country link immigration with "terrorism." A government leaflet issued for the referendum says there are 900 "no-go areas" with large immigrant populations in Europe, including London and Paris.

Orban is often seen bantering with EU President Jean-Claude Juncker who jokingly greeted him with "Hello, dictator" at an EU summit last year. "Behind closed doors, things are much more civilized," Austrian Chancellor Christian Kern quipped after another of Orban's anti-EU tirades at a recent EU gathering.

Orban, head of the right-wing Fidesz party, has organized the Oct. 2 referendum on migrant relocation under an EU quota plan. In late 2015, Hungary built fences along its borders with Serbia and Croatia to stem the massive tide of migrants. Other countries in the Balkans then followed suit.

Orban's government last September erected a fence topped with razor wire along the border with non-EU member Serbia, diverting the well-trodden Balkan migrant route northwards to Croatia. A month later, the border with Croatia was sealed off in similar fashion.

Those migrants who do sneak through into Hungary suffer illegal border push-backs and unlawful detention Amnesty International said Tuesday in a report that documented the "appalling treatment." Fences have, however, now appeared in other countries and amid an upsurge in populism across Europe.
RELATED TOPICS