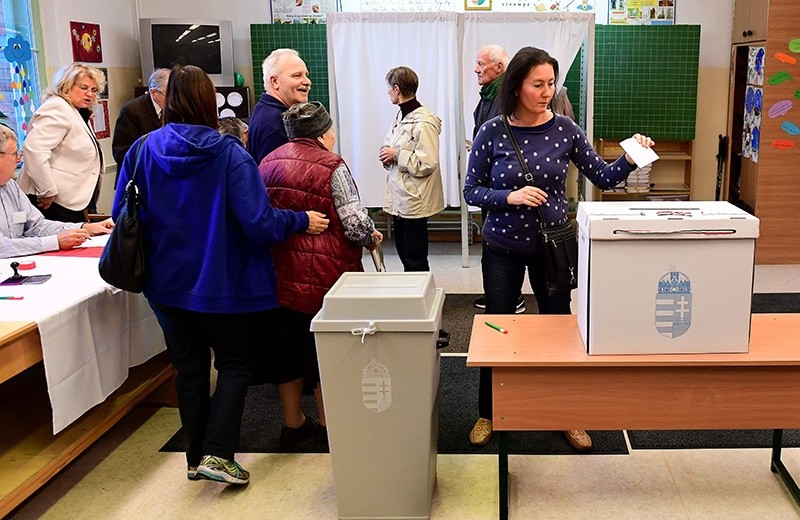 Hungarians were voting Sunday in a referendum called by Prime Minister Viktor Orban's government to seek support for its opposition to any future, mandatory European Union quotas for accepting relocated asylum seekers.

The government's position is expected to find wide support among voters, though there was uncertainty whether turnout would exceed the 50 percent plus-one-vote threshold needed for the referendum to be valid.

The referendum asks: "Do you want the European Union to be able to prescribe the mandatory settlement of non-Hungarian citizens in Hungary even without the consent of Parliament?"

Orban has argued that "No" votes favor Hungary's sovereignty and independence. If that position secures a majority of ballots, Hungary's parliament would pass legislation to bolster the referendum's goal whether or not turnout was sufficient for a valid election, he said.

Orban also said he would resign if the "Yes" votes won, but the vow was seen mostly as a ploy to boost turnout by drawing his critics to the polls.

"The most important issue next week is for me to go to Brussels, hold negotiations and try with the help of this result — if the result if appropriate— to achieve for it not to be mandatory to take in the kind of people in Hungary we don't want to," Orban said after casting his vote in an elementary school in the Buda hills.

Orban, who wants individual EU member nations to have more power in the bloc's decision-making process, said he hopes the anti-quota referendums would be held in other countries.

"We are proud that we are the first" he said. "Unfortunately, we are the only ones in the European Union who managed to have a (referendum) on the migrant issue. I would be happy to see other countries follow."

Polls show that the relentless campaign urging citizens to "send a message to Brussels" while associating migrants with terrorism has increased xenophobia in Hungary.

Several opposition and civic groups have called on citizens to stay home and boycott the vote. Others urged casting invalid ballots that would not count in the final tally, but still could be interpreted as rejecting the government's "zero migrants" policies.

Nearly 400,000 migrants passed through Hungary last year while making their way toward Western Europe. Razor-wire fences erected on the border with Serbia and Croatia, along with new expulsion policies, have reduced the numbers significantly this year.

Hungary last year rejected over 80 percent of the asylum claims made in the country, one of the highest rates in the EU, according to Eurostat, the EU's statistical office. The country granted asylum to 508 refugees, rejected 2,917 applications and had nearly 37,000 claims still being processed.