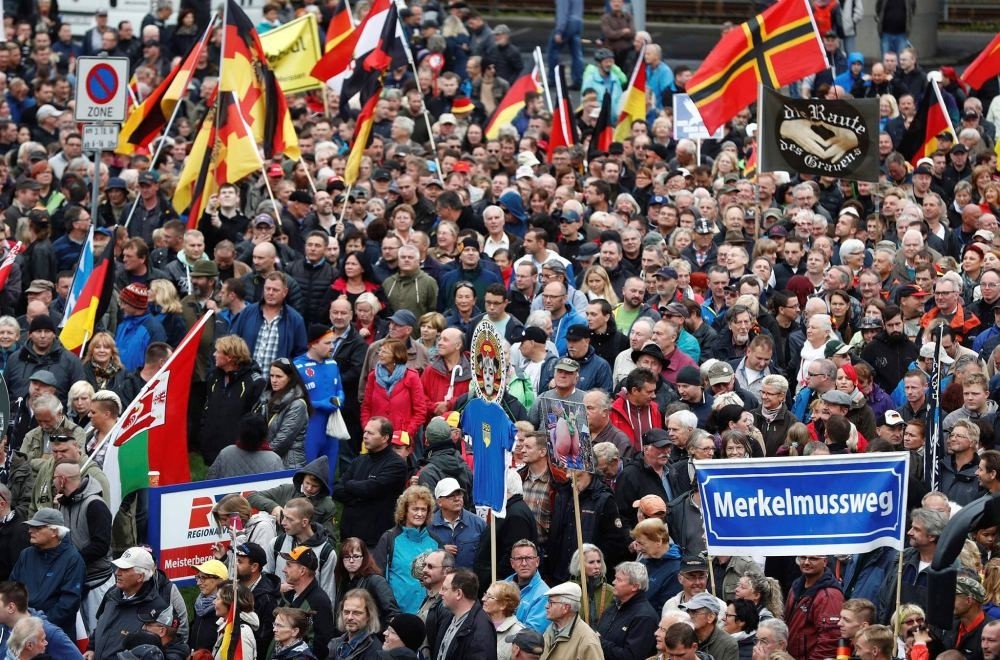 Supporters of the anti-immigrant PEGIDA movement took part in a protest against German Chancellor Angela Merkel and her policy on Oct. 3 in Dresden, eastern Germany.
by Daily Sabah with Wires Oct 05, 2016 12:00 am

Germany's national unification celebrations were overshadowed by xenophobic PEGIDA protests on Monday, as German society has been polarized with rising racist and right-wing attacks

Far-right protests has put a firm stamp on German unification day showing increasing polarization in German society as anti-immigrant and anti-Muslim sentiments has been on the rise in the country.

Hundreds of far-right protesters shouted abuse at Chancellor Angela Merkel as German leaders gathered in the eastern city of Dresden on Monday to celebrate the anniversary of the country's reunification 26 years ago.

Germany society has been polarized by the influx of some 890,000 asylum seekers last year. Although many fewer migrants have entered the country in 2016, an estimated 210,000 people so far, parties on the far right have called for an immigration cap. The German government published a report last month warning that there had been an increase of racist and far-right attacks in eastern Germany, calling the violence "a big threat for the development of the society and economy."

Merkel has repeatedly refused limiting the number of asylum seekers coming to Germany. In the face of heavy opposition against her migrant policy, she recently made it a priority to ensure that migrants who are not granted asylum in Germany be returned to their home countries more swiftly.

The protesters shouted "Merkel must go" and "traitor," as the chancellor left the city's Frauenkirche church after a morning ecumenical service. Merkel has been harshly criticized in some quarters for her welcoming refugee policy, and Dresden has been a center of the criticism. Despite the tense mood, Merkel called on Germans to enjoy unification day, which is a public holiday in the country, and to be grateful for the achievements of the last 26 years. "For me personally, but also for most people in Germany, this is still a day of joy, a day of thankfulness," said Merkel, who grew up in communist East Germany.

After being relegated to third place behind an anti-immigration party in the regional election in her constituency in Mecklenburg-West Pomerania, German Chancellor Angela Merkel is suffering from low popularity, cutting a lonely figure in her struggle for resisting pressure to change refugee policy. Even though Merkel defends her immigration policy and calls on all political parties to fight against xenophobic and Islamophobic rhetoric, her support is gradually diminishing in the German parliament and among political parties.

Merkel, whose long-stellar approval ratings have taken a dive amid the refugee crisis, came under fresh fire over her pro-immigration policy stance. Germany's position in the refugee crisis has transformed the AfD into a staunch anti-immigrant and anti-Muslim movement. The AfD has capitalized on widespread discontent about the arrival of the large number of migrants, which it argues resulted from Merkel's promise of sanctuary to Syrian refugees. The right-wing populist AfD party clinched almost 21 percent in its first bid for seats in the regional parliament of Mecklenburg-Western Pomerania.

Dresden's national unification celebrations took place amid tight security after two homemade explosive devices were set off outside a mosque and a conference center in the city last week and three police cars were destroyed in an arson attack Sunday. Dresden, the state capital of Saxony, is home to the anti-Islam group Patriotic Europeans against the Islamization of the West. Known by its German acronym PEGIDA, the group has become a magnet for far-right and anti-immigrant sentiment. Far-right crimes have significantly increased in Dresden since 2015, potentially triggered by Neo-Nazi propaganda and right-wing populist movements that have exploited the refugee crisis and fears of Islam. The incidents of far-right violence have increased from 48 in 2014 to 116 last year, according to the advocacy group RAA Sachsen.

Germany was divided into a capitalist west and communist east after the end of World War II. The country reunified on October 3, 1990.
Last Update: Oct 05, 2016 1:23 am
RELATED TOPICS