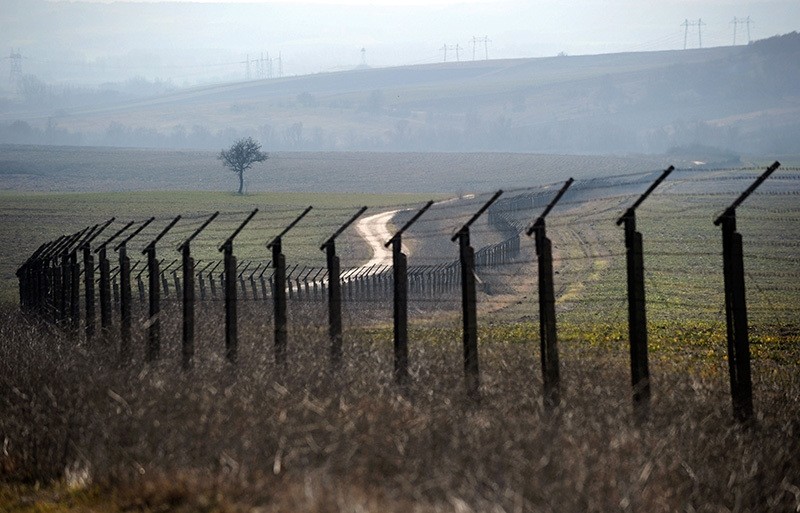 This file photo taken on February 11, 2011 shows a barbed wire fence near the Kapitan Andreevo border crossing point between Bulgaria and Turkey. (AFP Photo)
by Oct 06, 2016 12:00 am

The EU's beefed-up version of its struggling border force went into operation Thursday, in a rare show of unity by the squabbling bloc trying find a common strategy to tackle its worst migration crisis since World War II.

European Union officials inaugurated the new task force at the Kapitan-Andreevo checkpoint on the Bulgarian-Turkish border, the main land frontier via which migrants try to enter the bloc to avoid the dangerous Mediterranean sea crossing.

The European Border and Coast Guard Agency (EBCG) will have at the ready some 1,500 officers from 19 member states who can be swiftly mobilized in case of emergency such as a sudden rush of migrants.

Brussels hopes the revamped agency will not just increase security, but also help heal the huge rifts that have emerged between western and eastern member states clashing over the EU's refugee policies.

The long-term goal is to lift the border controls inside the bloc and restore the passport-free Schengen Zone.

"The new agency is stronger and better equipped to tackle migration and security challenges," EBCG director Fabrice Leggeri said in a statement.

Crucially, the force will conduct "stress tests at the external borders to identify vulnerabilities before a crisis hits", he added.

EU Migration Commissioner Dimitris Avramopoulos hailed the inauguration as a "milestone" of "shared responsibility and solidarity".

The boosted force is an expansion of Frontex, founded in 2004 to help coordinate Europe-wide efforts to combat people smuggling and illegal migration.

But the Warsaw-based agency proved inefficient last year when it was caught off guard by the hundreds of thousands of people who began trekking up from Greece along the so-called western Balkan route towards northern Europe.

With limited staffing levels and powers, Frontex was unable to effectively patrol the EU's external borders, including those of frontline countries Greece and Italy where most migrants enter.

The uncontrolled arrival of well over one million people, many fleeing war in Syria, triggered chaos on the continent, prompting key transit nations along the migrant trail to seal their borders with fences.

The flow also sparked fierce tensions inside the bloc, with eastern and central European nations lambasting Germany's "open-door" policy which they say allowed Islamist radicals to pose as refugees and help carry out attacks inside Europe.

All 28 member states agreed on the creation of the new border agency earlier this year.

As part of its expanded mandate, the EBCG will be involved in the repatriation of migrants who have their asylum claims rejected or are considered a security threat.

With the Balkan route shut, an increasing number of migrants attempt the treacherous sea journey from North Africa to Italy.

More than 3,500 migrants have drowned in the Mediterranean so far this year, latest figures show.

Bulgaria has already strung up a barbed wire fence that will soon cover most of its 259-kilometre (160-mile) border with Turkey.

The estimated 13,000 migrants stranded inside the country remain modest compared to the 60,000 stuck in Greece or the 140,000 who have crossed the Mediterranean to Italy so far this year.

But with its migrant centers overflowing, the EU's poorest member is still worried it will become a "buffer state" if a shaky EU deal with Turkey breaks down after the July coup attempt.