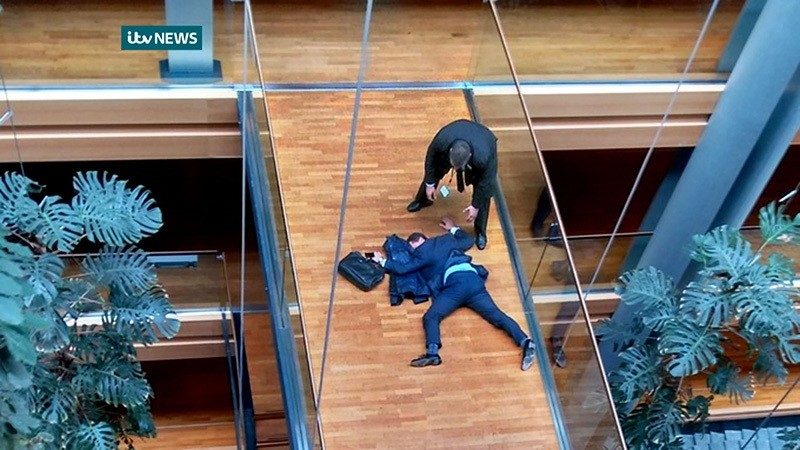 A handout picture released by ITV NEWS on October 6, 2016 shows UK Independence Party MEP, Steven Woolfe, lying face-down on a walk-way inside the European Parliament building in Strasbourg in eastern France. (AFP Photo)
by Compiled from Wire Services Oct 06, 2016 12:00 am

A British European parliamentarian is in serious condition at a hospital in France after reportedly being punched in the head by a colleague, according to Sky News.

Steven Woolfe, a deputy for the right-wing U.K. Independence Party (UKIP) who also turned 49 Thursday, is being treated for "bleeding on the brain" after the incident inside the European Parliament building in Strasbourg in the morning, Sky News reported.

UKIP interim leader Nigel Farage said in a statement: "I deeply regret that following an altercation that took place at a meeting of UKIP MEPs this morning that Steven Woolfe subsequently collapsed and was taken to hospital.

"His condition is serious."

Pictures shown by U.K. broadcaster ITV showed a man in a blue suit sprawled on the floor in a passageway within the parliament building.

A second photograph showed him being treated by paramedics at the scene.

European Parliament spokeswoman Marjory Van Den Broeke confirmed that emergency services were called after Woolfe had a medical incident in front of the parliament chamber at 12:40 p.m. on Thursday.

"At the moment I am feeling brighter, happier, and smiling as ever," Woolfe said in a statement via UKIP.

"As a precaution, I am being kept in overnight awaiting secondary tests to make sure everything in fine," he added.

Roger Helmer, a UKIP MEP who attended the closed meeting in Strasbourg told the BBC there had been "a lively exchange of views" but declined to give further details of the "confidential" event.

As Helmer tried to cross a walkway following the meeting, he was told "somebody had fallen," he said.

Woolfe's statement did not say how he sustained his apparent head injury.

But the BBC quoted other, unidentified UKIP sources, as saying Woolfe had left the meeting of MEPs with one unnamed UKIP politician and that punches were thrown outside the room.

Following bitter infighting in the party in recent months, Woolfe had announced his intention to stand for leader on Wednesday when Diane James, who was elected to succeed Farage last month, said she would not be taking up the post.

James said she was stepping down partly because she did not have "sufficient authority, nor the full support of all my MEP colleagues and party officers to implement changes."

Woolfe, a lawyer who is close to Farage, was excluded on a technicality from the earlier leadership contest after party officials said the online submission of his candidacy was received minutes after the deadline.

Woolfe was backed in the new election on Thursday by UKIP's biggest donor, Arron Banks, who said he hoped he would be able to "sweep aside the hopeless national executive committee and boot out [Douglas] Carswell," referring to UKIP's sole member of parliament.

Writing in The Guardian, Banks said Farage had been forced to fight "an extremely draining two-front war" against opponents who "sought to seize control of the party he built up from nothing, while he was out winning the [Brexit] campaign."

Thursday's incident came a day after Woolfe had declared his candidacy to become permanent leader of the anti-EU party.

British media reports suggested he was punched by a fellow UKIP deputy, although these could not be confirmed.

Founded in 1993 with the goal of removing Britain from the European Union, UKIP has moved from the fringes of British politics to a position of serious influence. Over the past few years the party has won over large numbers of Conservative and Labour voters by appealing to concerns about globalization and large-scale immigration.

UKIP was instrumental in getting Britain to hold a referendum on EU membership, which ended in a June 23 vote for Britain to leave the 28-nation bloc.

The result was an enormous political triumph for UKIP, but since then the always-fractious party has been torn by infighting.

Long-time leader Farage stepped down after the June referendum and was replaced by Diane James. She quit Tuesday after just 18 days, citing personal reasons — leaving Farage as interim leader.

Woolfe had announced his intention to run in an upcoming leadership contest and was bookies' favorite to win.

He was prevented from running to replace Farage in the leadership contest won by James because party officials said he missed the application deadline by 17 minutes.

Woolfe, said recently that he had considered joining the Conservative Party because he was "enthused" by new Prime Minister Theresa May's commitment to social reform. He said he decided to remain with UKIP because working-class people "need to have a voice against the elites."

UKIP has just one seat out of 650 in Britain's House of Commons, but — despite its vociferous opposition to the EU and all it stands for — it holds more than 20 seats in the bloc's parliament of 751 seats.