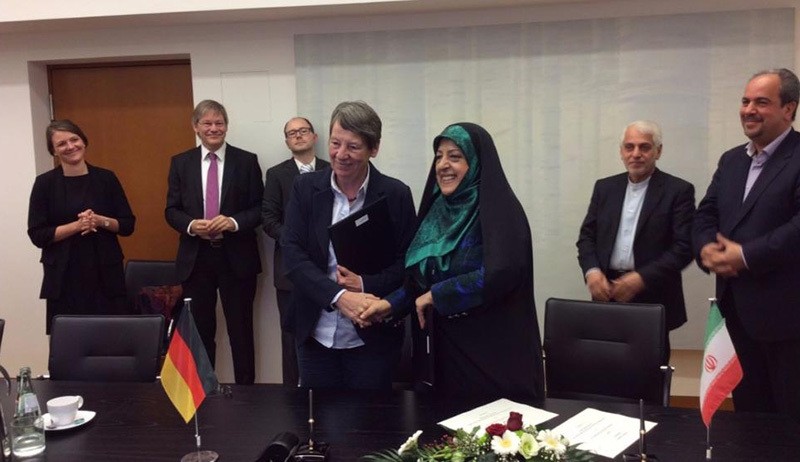 An innocent handshake between Germany's female environment minister and Iran's female vice president caused outrage on Iranian media and social networks, which mistook the short-haired German minister for a man, while in Germany, the shake caused uproar as the Iranian VP was involved in the Iran hostage crisis of 1979.

The uproar occurred after state television station IRIB reported about the meeting between Massumeh Ebtekar and German Environment Minister Barbara Hendricks in Berlin where they also shook hands.

According to the Iranian news agency Tasnim, the IRIB report and pictures led to assumptions end eventually uproar in Iran that Ebtekar had shaken a man's hand.

To shake a male stranger's hand is strictly taboo for observant Muslim women in Iran and an act that would have cost Ebtekar, who is also head of her country's environment agency, her job.

Tasnim clarified the story on Friday by reporting that Hendricks is in fact a woman, though it noted that in the video-report of the meeting she "looked like a man."

The IRIB studio in Berlin also clarified that the TV-report did not say that Ebterkar shook a man's hand and was therefore not responsible for the related wrong impressions caused by the pictures.

After their rout in parliamentary elections earlier this year, Iranian hardliners fear that moderate President Hassan Rouhani - with whom Ebtekar is allied - will be re-elected in May.

As a consequence they are reportedly taking every opportunity to use allied media such as IRIB to discredit the president and his government.

During the hostage taking crisis, in which a group of Iranian students occupied the U.S. Embassy and took 52 U.S. citizens hostage, Ebtekar acted as the spokeswoman for the hostage takers.