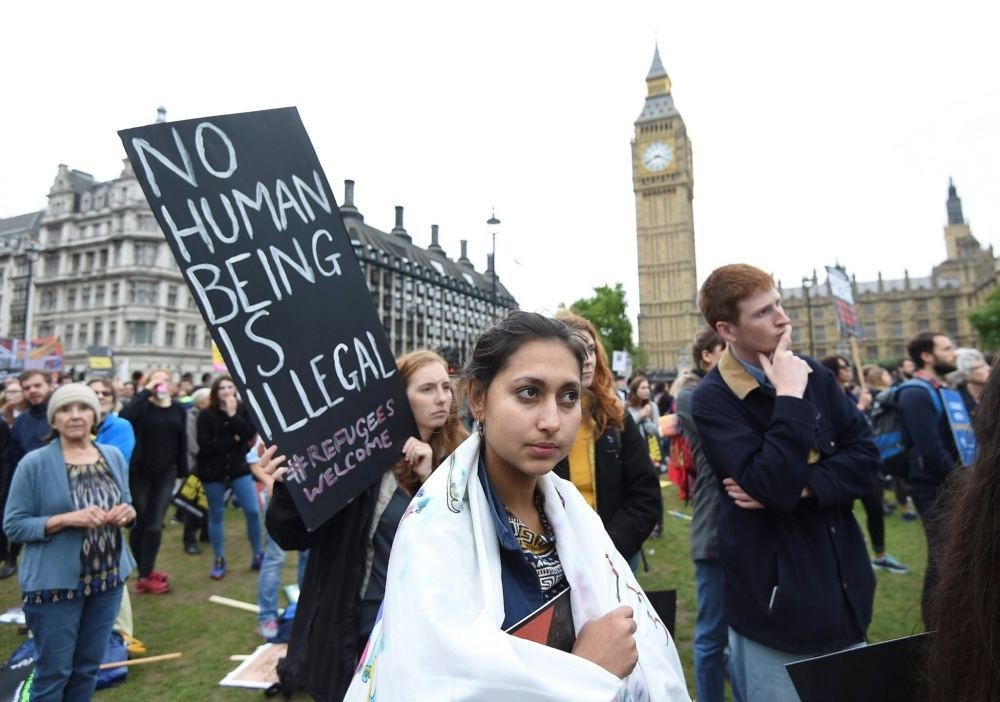 A Scottish minister criticized the British government's post-Brexit stance over immigration, saying that the country will be 'unbearable for Muslims in the future'

A Scottish parliament member, Mhairi Black has sparked a controversial Nazi debate, while criticizing the British governments' post-Brexit immigration policies. Scottish Government Minister for Transport and the Islands Humza Yousaf also defended Black's remarks after she compared the Conservatives to the Nazis, according to British daily newspaper the Daily Express.

"The Conservative Party's conference has unleashed ugly and downright scary rhetoric that I was brought up to believe was to be left in the past," Black said in her column in a Scottish daily newspaper, the National. "I am not exaggerating when I say that the policies being brought forward are reminiscent of early 1930s Nazi Germany."

Scottish Minister Yousaf defended her remarks in a Twitter post, saying "Feel the U.K. will be unbearable for Muslims in future."

The Council of Europe voiced concern earlier over a sharp rise in anti-Muslim violence in Britain in recent years, adding that campaigning for the Brexit referendum led to a further rise in "anti-foreigner sentiment." There has been a surge in hate crimes across Britain in the wake of June's referendum, which saw Britons vote to exit the European Union with immigration being one of the key issues. At its peak, there was a 58 percent increase in hate crimes and police recorded more than 14,000 such crimes in the period running from a week before the vote to mid-August.

British Prime Minister Theresa May has no democratic mandate to pursue a "hard Brexit" that would cut political and trade ties with the European Union, the Scottish National Party (SNP) said ahead of its annual conference later this week. The SNP, which has controlled Scotland's devolved government since 2007, starts a three-day conference in Glasgow on Thursday.

Most Scots voted for the United Kingdom to stay in the EU, unlike their compatriots in England and Wales, and the SNP has said June's result may re-open the case for another referendum on Scottish independence after 2014's vote to stay in the U.K.

Last week May said she would start two years of talks on leaving the EU by the end of March 2017, triggering several days of heavy falls in the sterling, which finished the week at a 31-year low, 17 percent below its pre-referendum level.

Much of the fall has been driven by concern that May's Conservative government favors a "hard Brexit" that curbs migration from the EU, rather than a "soft Brexit" that emphasizes maintaining close economic ties.

British Prime Minister Theresa May said last week that she will trigger Article 50 of the Lisbon Treaty - which sets the rules for a two-year negotiating process for a nation leaving the EU - by the end of March. Defense Secretary Michael Fallon told the BBC on Sunday that his government will pursue a "full Brexit," apparently implying that it will not try to remain in the EU single market.

In the face of Britain's demands on the terms for its divorce from the EU, German Chancellor Angela Merkel, along with other European leaders, hardens her stance against Britain saying that Britain cannot be allowed access to the EU's single market without accepting free movement of people. French President Francois Hollande sent one of the strongest warnings yet that Britain will have to pay a heavy price for leaving the European Union, while European Commission chief Jean-Claude Juncker said the bloc must be "unyielding" in the face of London's demands. Hollande called for "firmness" by the EU powers in Brexit negotiations to avoid the risk that other countries might seek to follow Britain's lead and leave the bloc.
Last Update: Oct 11, 2016 1:29 am
RELATED TOPICS