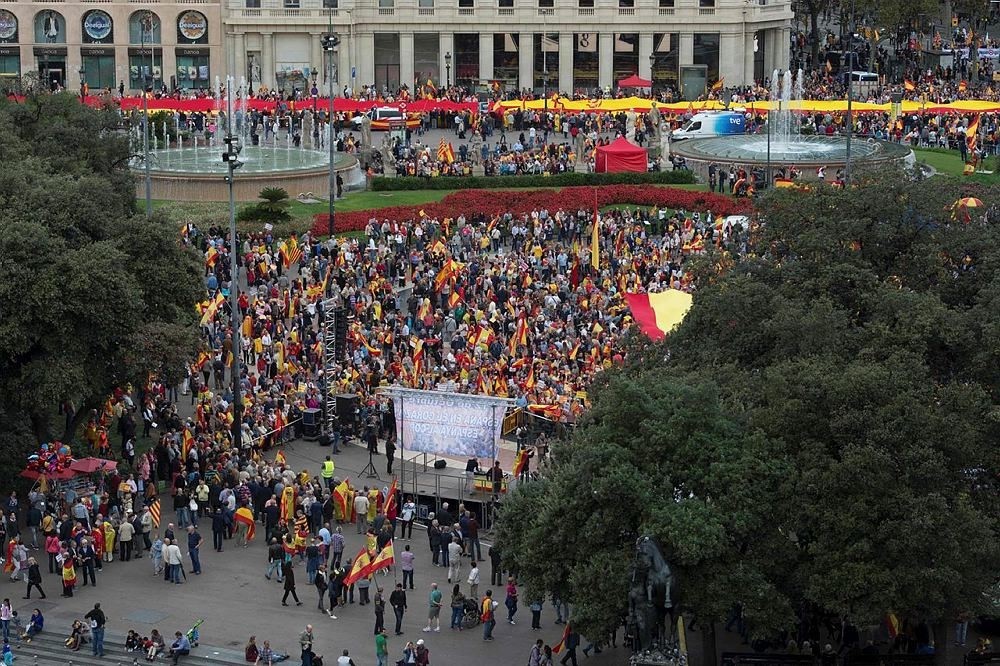 People against the independence of Catalonia wave flags during a demonstration for the unity of Spain marking the Spanish National Day (Dia de la Hispanidad), on Catalunya square in Barcelona on October 12, 2016. (AFP Photo)
by Anadolu Agency Oct 12, 2016 12:00 am

Dozens of towns and cities Catalonia refused to recognize Wednesday's national holiday in Spain in a sign of the region's growing detachment.

Local municipalities across the region refused to close for the day to mark Christopher Columbus' 1492 arrival in the Americas under a Spanish flag despite court orders to do so.

Many Catalans associate the holiday, which is marked by a huge military parade in Madrid, with the 1939-75 regime of dictator Francisco Franco, which brutally repressed Catalan and other minorities, and the deaths of indigenous Americans.

"There's nothing to celebrate," Josep Tellez, the deputy mayor of Badalona, said before ripping up a judge's decree in front of city hall. The order obliging the municipality to close for the holiday was issued Tuesday but was ignored.

Around 40 areas across Catalonia have refused to close for the holiday.

The rebellion is Catalonia's latest protest against Spanish law. The northeastern region's government is currently working on a plan for independence that has been annulled by the Constitutional Court.

Xavier Garcia Albiol, regional president of the Popular Party, criticized municipalities' "brazen and disobedient attitude". "There should be some sort of reaction from the justice because if not we're going to end up turning this country into a jungle," he told the Agencia EFE news agency.

El Pais newspaper said left-wing lawmakers had last month proposed banning the Oct. 12 holiday and taking down a prominent statue of Columbus in Barcelona's center. "The celebration of the arrival of Christopher Columbus to America represents the intolerable act of the glorification of colonialism and imperialism," they reportedly said.