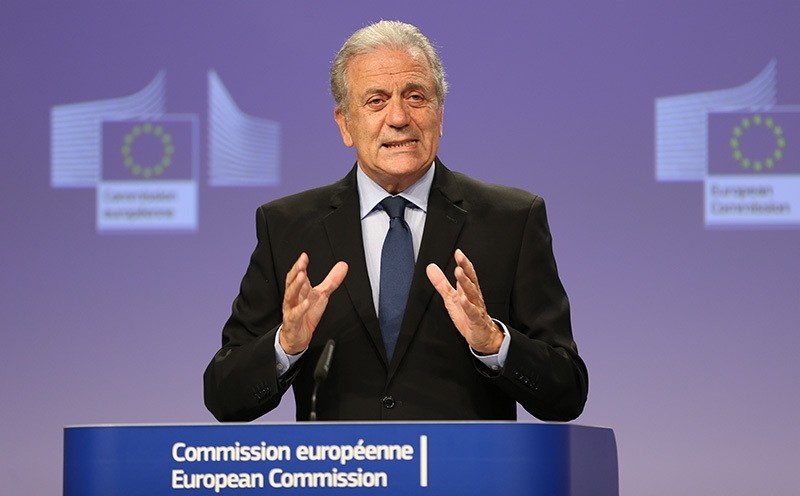 EU Migration Commissioner Dimitris Avramopoulos at a press meeting in Brussels (AA Photo)
by Daily Sabah with DPA Oct 12, 2016 12:00 am
The European Union launched talks Wednesday aimed at securing Tunisia's cooperation in the repatriation of citizens who have no right to stay in the bloc, in return for a lowering of hurdles for Tunisian visitors to Europe. The bloc had signed a similar deal with Turkey, but has failed to implement visa liberalization with Ankara saying it will scrap the deal to stem the flow of illegal migrants to the bloc.

Following a migration surge last year, the 28-country EU has been cracking down on migrants who are not entitled to remain in the bloc, to make it easier to accommodate asylum seekers who are fleeing war and violence.

The process is controversial though, with rights groups critical of forced repatriations and the stick-and-carrot approach the EU is taking with migrants' countries of origin and transit.

In the case of Tunisia, the EU could relax or eliminate some visa requirements for short-term visitors, at least for some groups of people, according to a statement by the European Commission, the bloc's executive.

Meanwhile, an EU-Tunisia readmission deal being negotiated in parallel would aim to "lay down the procedures to be followed by both sides in order to clarify, simplify and speed up cooperation," it added.

"Tunisia could be the first country in North Africa to benefit from an ambitious visa facilitation agreement," EU Migration Commissioner Dimitris Avramopoulos said.

"At the same time, the conclusion of a readmission agreement will help to avert the risk of irregular immigration from Tunisia, and manage its consequences," he added.

Tunis also stands to benefit from an EU trust fund aimed at addressing root causes of migration in Africa, such as economic hardship.

EU member states issued 155,000 short-stay visas for Tunisians in 2015, while 370,000 Tunisians were legally resident in the bloc at the end of the year, according to the commission. Most lived in France, followed by Italy and Germany.

The EU signed a similar agreement with Turkey, which entered into in October 2014, making it possible to return undocumented, illegal refugees who enter Europe via Turkey and vice versa.

After failure of visa liberalization for Turkish citizens, Turkey has said that it will consider cancelling the readmission deal.