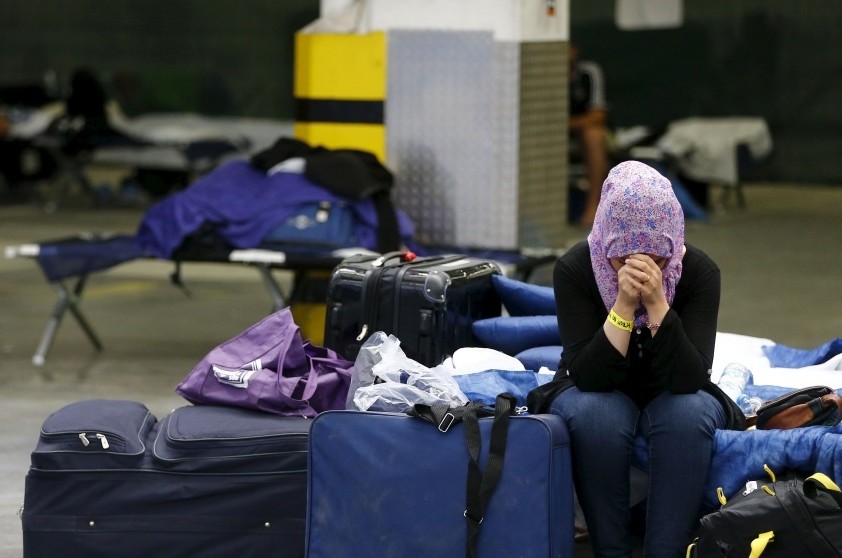 A Syrian sits on a folding bed in a former newspaper printing house being used as a refugee registration center in Frankfurt.
by Compiled from Wire Services Oct 13, 2016 12:00 am

Amid growing criticism over the governments' open-door refugee policy, new legislation will be drafted to more easily deport rejected asylum applicants, according to German media

In a bid to deal with lowering support for the conservative government, Germany toughens its stance over refugees through preparing a new draft legislation that will make it harder for migrants denied asylum to stay in Germany, the German newspaper Die Welt said on Wednesday.

The newspaper said new legislation drafted by Interior Minister Thomas de Maiziere along with being circulated among other ministries would establish new rules for deporting migrants who had broken German law and posed significant danger. De Maiziere and other conservative government officials began urging faster repatriation of those whose asylum applications have been denied after a spate of violent attacks in Germany in July, two of which were carried out by Syrian refugees linked to Daish. Police on Monday arrested a 22-year-old Syrian man who had been granted temporary asylum in June 2015 and said he was ready to carry out attacks similar to those in Brussels and Paris.

The incident has fueled criticism of Chancellor Angela Merkel, and de Maiziere, whose conservative Christian Democrats have lost support to the far-right Alternative for Germany (AfD) party over the government's open-door refugee policy. Bavarian Interior Minister Joachim Herrmann, a member of the CDU's Bavarian sister party, and other top officials in that party, have called for a review of all migrants who were granted asylum after last year's influx of nearly a million people. As of Aug. 31 there were 210,0209 migrants in Germany who were required to leave, of whom 158,190 had been granted waivers of some kind that allowed them to stay temporarily, Die Welt said, citing the draft legislation. "If deportation is not possible because the foreigner has, for example, misled authorities about their identity or nationality, or is not cooperating with efforts to secure a replacement passport, then they will no longer receive exceptional leave to stay," the legislative draft said.

The refusal of the country of origin to issue replacement papers would also no longer be a reason for granting waivers, the newspaper said. In addition, the legislation would require authorities to notify migrants only 30 days before their scheduled deportation, so as to minimize the opportunity for them to go underground to avoid leaving the country. The new draft law would also increase the time for those who refused to leave the country, adding they could be held in custody for two weeks from four days currently.

Merkel, whose long-stellar approval ratings have taken a dive amid the refugee crisis, came under fresh fire over her pro-immigration policy stance. German Chancellor is suffering from low popularity, cutting a lonely figure in her struggle for resisting pressure to change refugee policy. Support for German Chancellor Angela Merkel's center-right coalition dropped below the 30 percent mark for the first time, according to a poll released Tuesday. The INSA survey in Bild newspaper put Merkel's conservatives down 0.5 percentage points at 29.5 percent, the lowest level measured for the bloc by that polling institute.

Even though Merkel defends her immigration policy and calls on all political parties to fight against xenophobic and Islamophobic rhetoric, her support is gradually diminishing in the German parliament as well as among political parties.
RELATED TOPICS