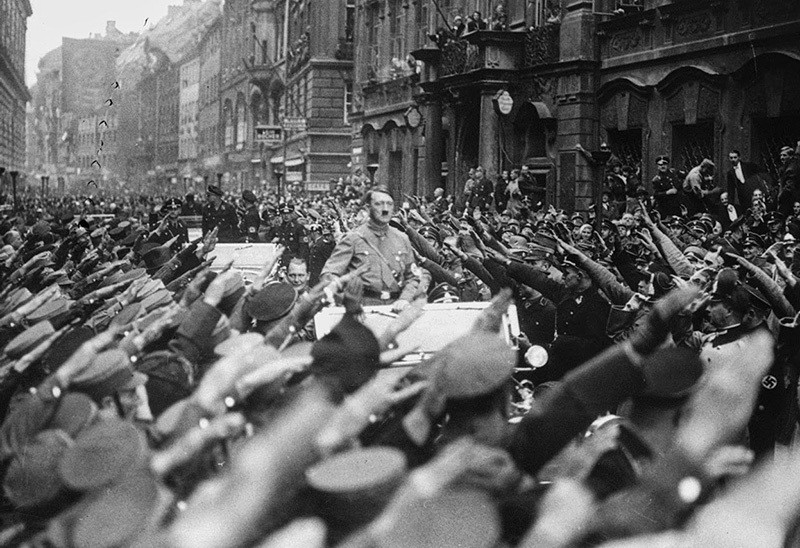 Long-banished German words and phrases linked to the country's Nazi past have been revived by far-right politicians railing against the refugee influx, sparking comparisons to the 1930s.

The re-emergence of formerly taboo words has prompted some historians to draw parallels with the rhetoric used in the final, turbulent years of the Weimar Republic, the fledgling democracy that gave way to Adolf Hitler's dictatorship.

For more than a year, the Islamophobic Pegida street movement has routinely insulted the media as "Luegenpresse" (Lying press), a word used by Hitler in the 1920s to discredit the mainstream press.

While "Volksverraeter" is a bona fide word denoting someone committing treason, it carries a stench when used in political protests, evoking Hitler and his henchmen going after those they labelled enemies of the state.

At German reunification anniversary celebrations in the eastern city of Dresden in early October, one protester went as far as to carry a banner bearing a quote attributed to Nazi propaganda chief Joseph Goebbels.

In Germany, where glorification of the Nazis is a crime, some have called for the law to step in.

"When national incitement becomes a popular sport, the state cannot just watch on," said Sueddeutsche Zeitung daily in an editorial, adding that "there has already been a Weimar Republic. It must not be followed by a Dresden Republic".

But the loaded vocabulary is not only deployed by angry protesters ranting on the streets.

Some politicians too have been using racially charged words such as "voelkisch", a term meaning "ethnic" but used by the Nazis to describe people belonging to the superior German race, and "Umvolkung" - the fascist idea of replacing racially inferior populations with the German people.

The leader of the anti-refugee right-wing populist party AfD, Frauke Petry, who has never been shy of controversy, last month suggested that "voelkisch" be rehabilitated and wiped of its negative connotation.

"I do not use this term myself, but I don't agree that it should only be used in a negative context," she told Die Welt daily, drawing a chorus of condemnation.

Die Zeit columnist Kai Biermann pointed out that "the term voelkisch was a synonym for extreme nationalism and racism. It is, until today, a symbol for Nazism and its ideology to exterminate and murder everyone who is not German."

The columnist charged that Petry had dug up the term because "it expresses the wish to reject everything that does not belong to one's people".

"It stirs up the fear that too many foreign people are coming who can change the status quo," he wrote.

A politician belonging to Merkel's Christian Democratic Union went on to also use the term "Umvolkung".

While the Nazis had used the word to define the Germanization of people in regions seized by the Third Reich, today it is used in the far-right milieu as shorthand for immigration.

Bettina Kudla drew fire when she said in a tweet that: "Merkel disputes it ... The Umvolkung of Germany has already begun. Action is needed!"

Hans Kundnani, political analyst at the German Marshall Fund, noted that politicians would not have used these controversial terms two decades ago.

"There's been a shift in German national identity over the last 15 years or so, and I think the use of these terms has reemerged against that backdrop", he said.

What has changed is that there has been a "resurgence in the collective memory of Germans as victims" in World War II.

As a result "Germany has become a little bit less critical about the Nazi past than it used to be", he said.

Reunification 26 years ago may also have played a part, as it meant that "discourse in Germany is now partly being influenced by east Germans in a way that it hasn't been before", he said.

Political scientist Hans Vorlaender said: "In eastern Germany, and in particular in Saxony state, there is a greater propensity to use these terms.

"This is because, especially in Saxony, they are much more conservative and more nationalist in their thinking," he said, noting that the AfD and Pegida were playing to this.

Such speech should not be interpreted as an attempt to resurrect fascism, said the professor at Dresden University.

Rather, he said, "what they want is to strengthen national patriotism and to say that there is no historical responsibility for Germany to welcome every Muslim here".