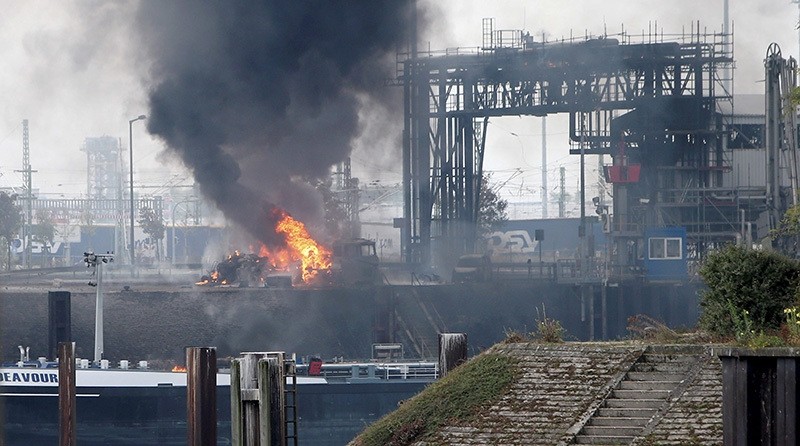 One person was killed and at least six others were missing after an explosion Monday at a chemical plant at BASF's headquarters in western Germany, the firm said, advising local residents to stay indoors.

The blast, which occurred around 11:30 am (0930 GMT) and triggered a huge fire, happened during work on a pipeline that transports raw materials, the global chemicals giant said in a statement.

"We regret to announce one dead, at least six injured and at least six missing," BASF executive Uwe Liebelt told reporters in Ludwigshafen.

A police official at the same press conference spoke of "six seriously injured and an unknown number of light injuries".

A large fire and a huge column of grey smoke could be seen rising from the site, a vast industrial complex with a harbour on the Rhine river.

"We have not been able to establish any danger to the population," Liebelt added, after residents in Ludwigshafen and nearby Mannheim were told to remain inside and shut doors and windows.

Local authorities had also asked nurseries and schools to keep children indoors, but no evacuations were ordered.

"Emergency services from the whole region are on the scene to prevent the fire spreading to other parts of the plant," Ludwigshafen city authorities said in a statement earlier in the day.

Firefighters were still trying to extinguish the flames by 1330 GMT, while police had blocked off nearby roads, an AFP reporter at the scene said.

"We hope to have the fire under control by this evening," a spokesman for the local fire services told reporters at the same press conference in Ludwigshafen.

BASF said it was still investigating the precise cause of the blast.

The site's steam cracker units -- used in a chemical procedure to produce lighter hydrocarbons -- have been shut down for safety reasons, it added.

Ludwigshafen is a city of some 160,000 people located around 80 kilometres (50 miles) southwest of Frankfurt.

City authorities said fire engines as well as a fireboat had been deployed to the scene.

An emergency hotline has been set up as well as an information tent.

The Landeshafen Nord site where the explosion took place is a harbour used for the transportation of combustible fluids and liquefied gases.

On its website, the company describes the site as a "very important for BASF's supply of raw materials", where more than 2.6 million tonnes are handled each year.

The goods are unloaded from ships into the production plants via a system of pipelines.

The company employs 36,000 people in Ludwigshafen.

BASF was also grappling with a second, smaller incident at its nearby Lampertheim plant where four people were injured in a gas explosion and had to be taken to hospital, DPA news agency reported.

BASF said the two incidents were not related.

The company employs over 110,000 employees worldwide, with sales of more than 70 billion euros ($77 billion) last year.

In its deadliest incident to date, nearly 600 people were killed in 1921 in an explosion at an ammonia plant near Ludwigshafen.

In 1948, 200 people died and more than 3,800 were injured when a rail tanker exploded, also at the Ludwigshafen complex.