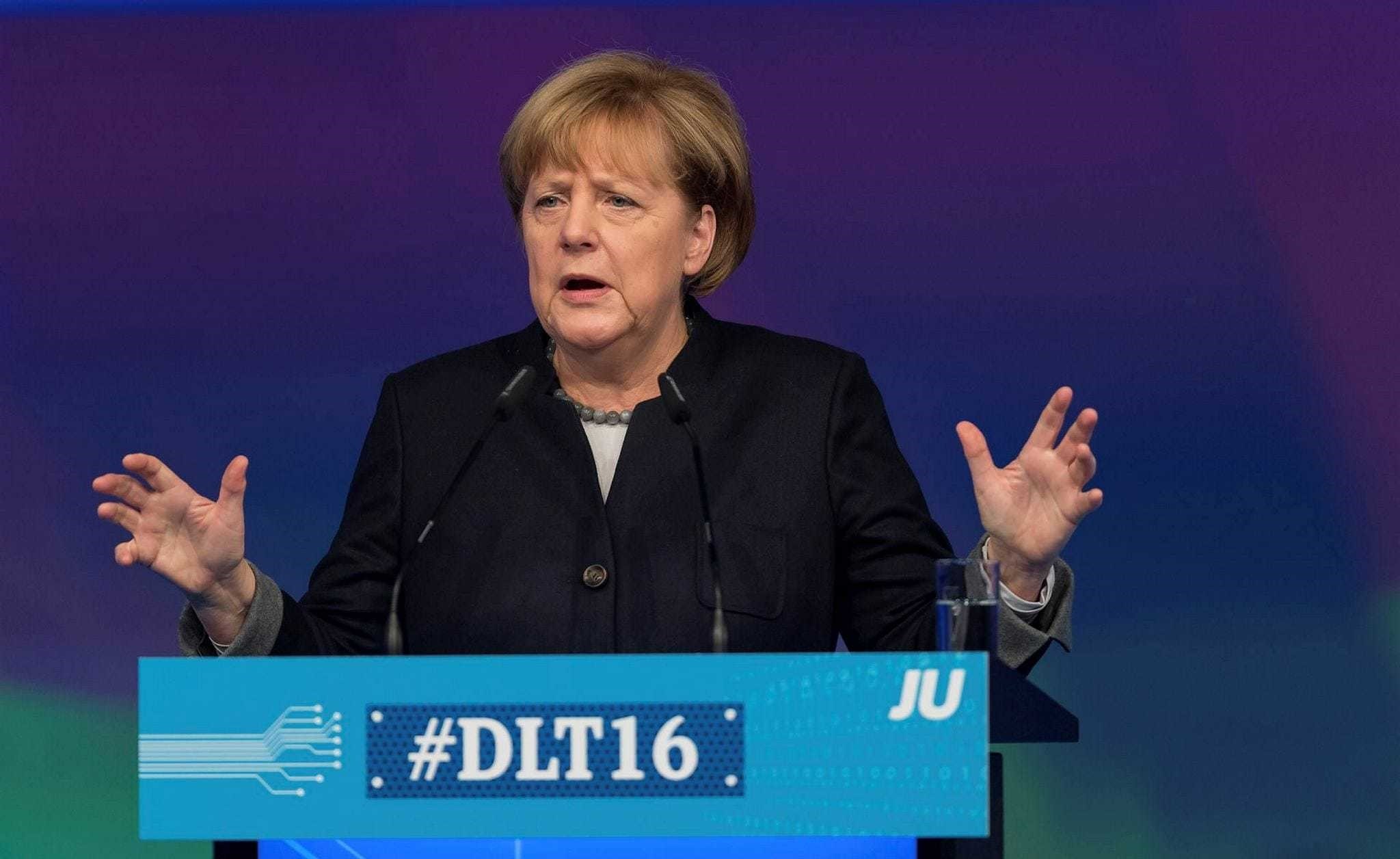 German chancellor Angela Merkel delivers a speech at the meeting of her Christian Democrats' Youth Organization in Paderborn, Germany, Oct. 15.
by Compiled from Wire Services Oct 17, 2016 12:00 am

In a bid to reassure voters about immigration policy, German Chancellor Merkel toughened her stance on open-door refugee policy in the country

German Chancellor Angela Merkel said on Saturday that Germany needed to make a national effort to deport migrants who do not have the right to stay in the country, addressing the issue at a conference Saturday of the Union's youth wing. The move came after Germany Interior Minister Thomas de Maiziere drafted a new legislation in order to more easily deport rejected asylum applicants. In a bid to deal with lowering support for the conservative government, Germany toughens its stance over refugees through preparing a new draft legislation that will make it harder for migrants denied asylum to stay in Germany, the German newspaper Die Welt said last Wednesday.

After an influx of almost 900,000 migrants last year, some Germans fear their country is being overrun by foreigners. Merkel has attracted criticism for her open-door refugee policy and her conservatives have lost some support to the anti-immigrant Alternative for Germany (AfD).

In the past, when smaller numbers of asylum seekers arrived, those who were not granted the right to stay were not deported rigorously enough and that needs to change now, given the high number of refugees and migrants, Merkel said. "We need a national push to deport those who are rejected. That's indisputable and we're working hard on that at the moment," Merkel told a conference of the youth wing of her conservatives in Paderborn.

German Chancellor Merkel's most prominent domestic critic in the migrant crisis says he will stick to what he says is a "core" demand for a cap on the number of refugees that Germany accepts each year. Horst Seehofer is Bavaria's governor and the leader of the Christian Social Union, the Bavarian arm of Merkel's Union bloc. Seehofer has long criticized Merkel's welcoming approach to migrants last year and is pressing for an annual refugee cap in Germany of 200,000, a call Merkel so far has rejected.

A national election is expected next September, and the dispute has been overshadowing conservative preparations for it. Seehofer told Sunday's Bild am Sonntag newspaper that he hopes to resolve the argument this month but said: "I won't give up this core element just so that there is harmony." "I won't sell the soul of the CSU," he was quoted as saying.

Merkel, whose long-stellar approval ratings have taken a dive amid the refugee crisis, came under fresh fire over her pro-immigration policy stance. German Chancellor is suffering from low popularity, cutting a lonely figure in her struggle for resisting pressure to change refugee policy. Even though Merkel defends her immigration policy and calls on all political parties to fight against xenophobic and Islamophobic rhetoric, her support is gradually diminishing in the German parliament and among political parties. Her party suffered an electoral blow in Berlin state elections, two weeks after being relegated to third place behind anti-immigration AfD party in the regional election in her constituency in Mecklenburg-West Pomerania. The AfD has capitalized on widespread discontent about the arrival of the large number of migrants, which it argues resulted from Merkel's promise of sanctuary to Syrian refugees.
RELATED TOPICS