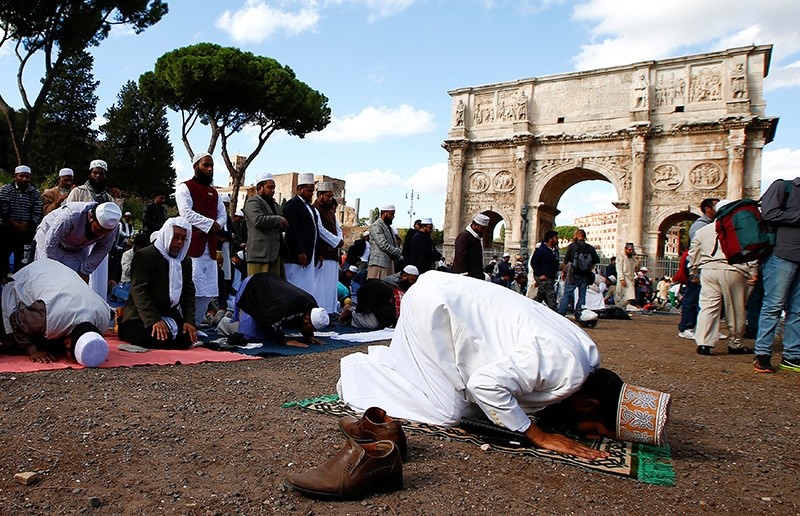 Several hundred Muslims staged a protest prayer outside the Colosseum in Rome on Friday over what they see as unfair restrictions on their freedom to practice their faith in Italy.

Organizers said they had called the demonstration following the recent closure on administrative grounds of five makeshift mosques.

Many Italian Muslims suspect local authorities are responding to a climate of mistrust caused by recent terrorist attacks in Europe by closing down the places of worship on the grounds of easily resolved problems such as the number of toilets on a particular premise.

"We feel people are pointing the finger at us," said Francesco Tieri, a convert to Islam who acts as a coordinator for a number of Islamic groups.

"There is no political will to recognize that we are here and that we are a peaceful community.

"We are forced to rent places to pray -- which for us is like breathing air, if we can't do it we die."

According to official figures there are just over 800,000 Muslims living in Italy legally and officials estimate that a further 100,000 live in the country permanently without official papers.

That would suggest the community makes up more than 1.5 percent of the population and that Islam is the second most followed faith in the mostly Roman Catholic country.

Islam however is not recognized as an official religion, unlike Judaism or the Mormon faith, and many Muslims from North Africa and South Asia feel discriminated against on the grounds of both race and religion.

Rome is home to the biggest mosque in the Western world but proposals to construct traditional-style mosques elsewhere have frequently run into opposition from local councils who can withhold planning permission on any number of technical grounds ranging from the size of proposed parking facilities to the architectural harmony of a particular neighborhood.

Right wing parties have called for a blanket ban on any mosques built with funds from donors outside of Italy.

Lawmaker Barbara Saltamartini of the anti-immigration Northern League called Friday's demonstration "an unacceptable provocation" which should never have been allowed to take place in Rome.