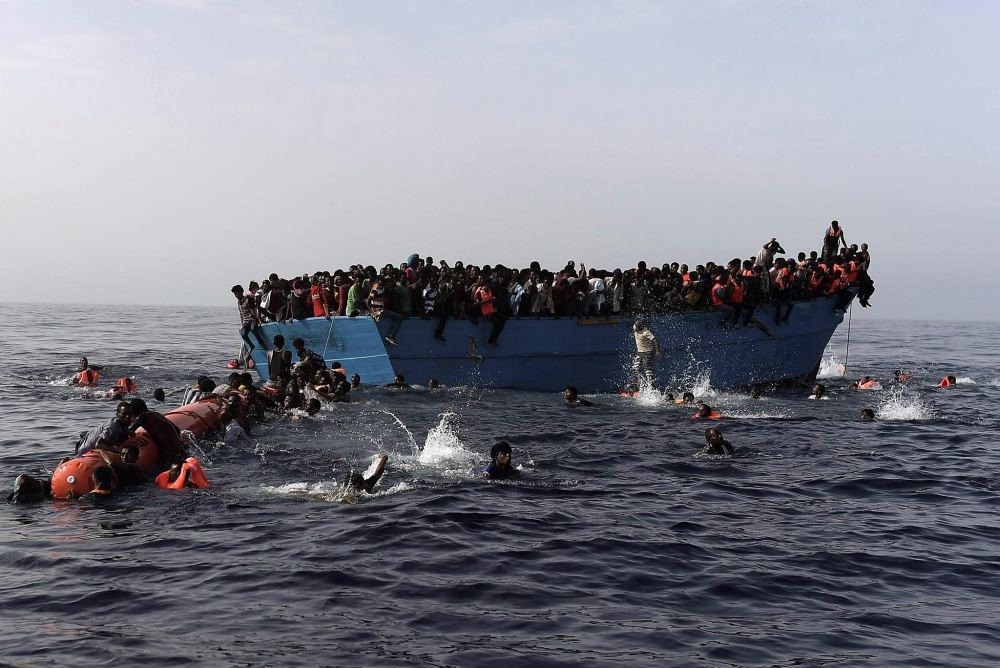 Amid calls for the EU to change tack on handling sea rescues at the Mediterranean, search and rescue operations reveal human suffering with horrific scenes from full-to-capacity rescue ships

Horrific scenes unfolded in the Mediterranean off Libya Saturday as a full-to-capacity rescue ship was forced to sail away from desperate migrants trying to swim toward the rescuers. During a dramatic 24 hours, the crew of the Norwegian Siem Pilot and another aid boat rescued panicked migrants in the dark, with only limited resources and in the face of aggressive people smugglers.

Around 2,400 migrants were rescued and 14 dead bodies pulled from the water on Saturday, according to the Italian coastguard.

"I've never had a SAR [search and rescue] like it. We were in the process of transferring 1,000 migrants from the Okyroe [tanker] to the Siem Pilot when suddenly, in the dark, rubber boats appeared. It looked hopeless," said Pal Erik Teigen, the police officer in charge of the rescue operation.

Migrants aboard one of the rubber boats yet to be rescued desperately sought to reach the rescue ship, which by that point was full to capacity and unable to take on more passengers, motoring towards it while crying out for help. Around 25 people threw themselves into the water to attempt to swim towards the Siem Pilot, forcing the captain to pull back to deter others on the dinghy from doing the same.

"It was the craziest SAR I've ever experienced. At night-time, with a wooden boat, dinghies, people in the water, and a transfer from a tanker," said Jan Erik Valen, an intelligence officer and crew member who provided security for the operation, part of the EU's Frontex border force mission in the region, describing the panic that greeted him as he boarded the overloaded tanker during the initial rescue.

The latest surge in new arrivals means at least 142,000 migrants have reached Italy since the start of the year and around 3,100 have died making the perilous trip. An estimated 154,000 came to Italy in 2015 and 2,892 died. The vast majority come from Africa, including Nigeria, Eritrea, Guinea, Gambia, Sudan, Ivory Coast and Somalia.

The migrants are brought to Italy, where EU and Italian officials work together to identify and fingerprint the asylum seekers. European law says migrants must stay in the country where they first enter the bloc and Italy is increasingly struggling to deal with the growing numbers.

Libya has become the main jump-off point for migrants heading for Europe. According to the International Organization for Migration (IOM), there are more than 264,000 refugees and migrants currently in the war-torn country. After a proposal by Hungry to establish a "city for refugees" in the North African country, the Libyan unity government slammed Hungarian PM's call saying that it is "violation to Libya's sovereignty, territorial integrity and independence." The Libyan Foreign Ministry said Orban's call "does not serve cooperation between Libya, Hungary and EU countries." Speaking at a summit of EU leaders in Vienna early October, Hungarian Prime Minister Victor Orban said a "giant refugee city" should be built on the Libyan coast to process asylum claims before they reach to Europe. Some 170 Libyan activists signed a statement rejecting the Hungarian proposal and sent it to diplomatic representatives of the EU, U.N., the African Union and Arab League in Libya.
RELATED TOPICS