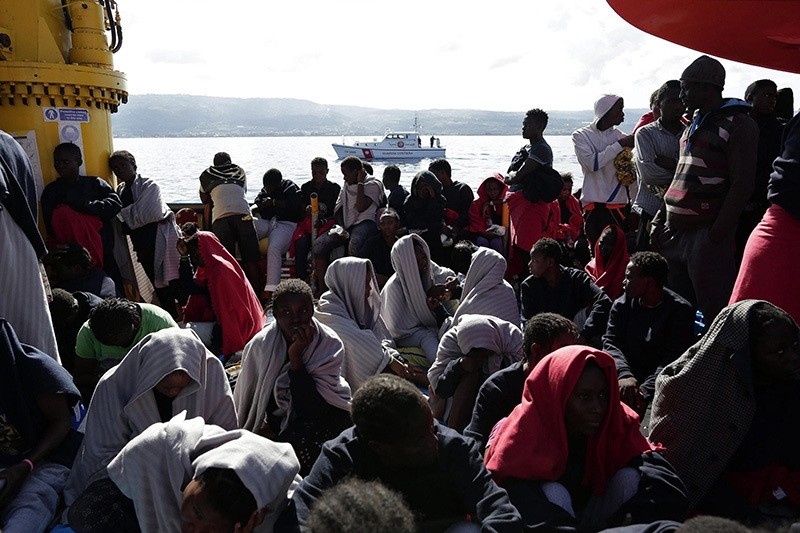 A handout picture released by the Italian Red Cross shows migrants onboard the flagship rescue vessel Responder, a rescue boat (EPA Photo)
by Oct 25, 2016 12:00 am
Italian Prime Minister Matteo Renzi on Tuesday said that the country cannot handle the same number of migrant arrivals next year that it has seen in 2016, calling on other European countries to do more.


In an interview with RAI state television, Renzi repeated a threat to veto the disbursement of European Union funds to countries that refuse to help Italy and Greece, who have taken in hundreds of thousands of migrants over the past three years.

"Italy cannot take another year like the one we've just had," Renzi said during the recording of a talk show. He said the flow of arrivals must be curbed by March, without saying what would happen if it was not limited.

Another 500 people were rescued from four different boats on Tuesday, the coastguard said in a statement.

For a third year, people smugglers are taking advantage of chaos in Libya to send migrants fleeing violence and poverty in Africa and the Middle East on overcrowded boats toward Italy and the EU.

More than 3,100 have died or disappeared trying to cross the the Mediterranean from North Africa this year, the International Organization for Migration estimates.

The prime minister has frequently denounced a lack of European solidarity amid the migrant crisis as Italy seeks EU approval for an expansionary budget that includes some 3.9 billion euros ($4.25 billion) in spending on migrants next year.

"Instead of opening their mouths, they should open their wallets," he said.