Migrants stream out of Calais under heavy police presence 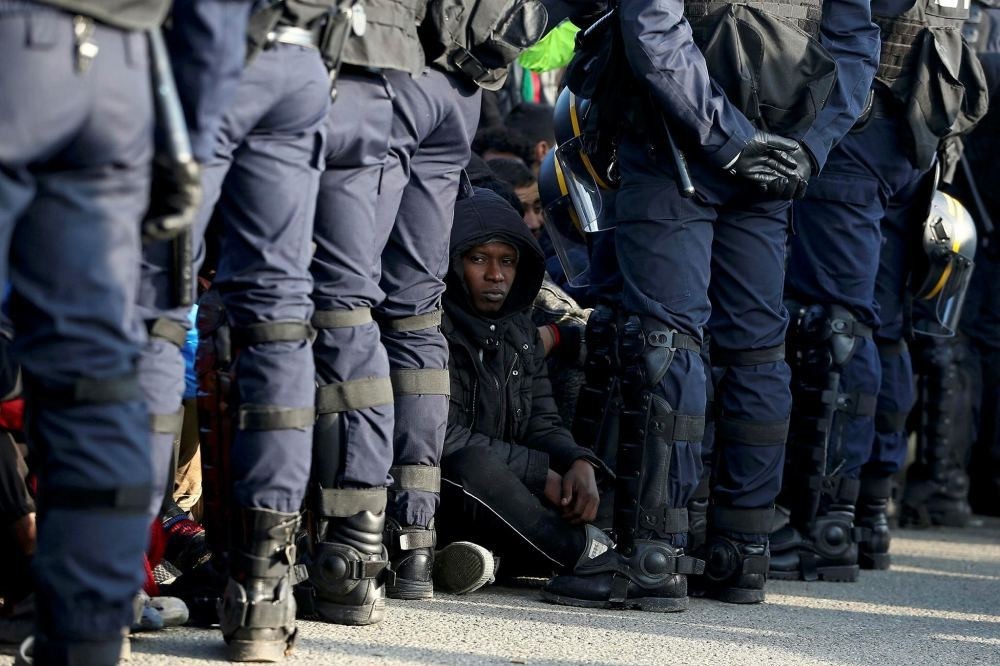 French police stand near as migrants wait in front of a processing center to be registered on the second day of their evacuation during the dismantlement of the camp called the ,Jungle, in Calais, France, Oct. 25.
by Daily Sabah with Wires Oct 26, 2016 12:00 am

Calais refugees, threatened with force if they fail to obey orders, are leaving the 'jungle' camp under strict police surveillance after violence erupted during a previous demolition attempt

Closely watched by more than 1,200 police, dozens of buses began transferring refugees from the Jungle camp to reception centers around France where they can apply for asylum. French police were being deployed to keep order among the young migrants pushing barriers at Calais's makeshift camp. Dozens of migrants jumped over railings Tuesday in an attempt to get to the camp's temporary processing center, the first step to being relocated in France.

On the second day of the French authorities' operation to clear the camp of its thousands of inhabitants and resettle them elsewhere, the operation has been largely peaceful. As the French government expects more violent attacks during the demolition of the Jungle camp, Monday's proceedings showed that the atmosphere has been relatively calm in the camp. However, police violence in Calais has been reported lately before the demolition began. The Independent reported on Oct. 14 that migrants in Calais were subjected to "humiliation and intimidation" by French law enforcement officials, saying French police "stripped migrants of their shoes and forced them to walk in bare feet to deter them from venturing outside the Calais camp."

France began the mass evacuation Monday of the makeshift migrant camp known as "the jungle," a mammoth project to erase the humanitarian blight on its northern border, where thousands fleeing war or poverty have lived in squalor, most hoping to sneak into Britain. French Interior Minister Bernard Cazeneuve said 1,918 migrants left Calais voluntarily on buses bound for 80 reception centers across France under heavy police presence.

London and Paris have been at odds over the fate of about 1,300 unaccompanied child migrants. The French government last week urged Britain to step up its efforts and resettle child migrants. On Monday, British Interior Minister Amber Rudd said Britain would take in roughly half of the camp's children who are alone. "Then we will have done our commitment to the French," Rudd told lawmakers in parliament.

Britain and France signed the so-called Le Touquet accord effectively moving Britain's border with France to the French side of the Channel in 2003. An estimated 6,000-8,000 people, mainly Afghans, Sudanese and Eritreans, have been living in dire conditions in the Jungle in the hope of sneaking into Britain. Christian Salome, head of the Auberge des Migrants (Migrants' Hostel) charity, said the transfer process was "working well" but he feared around 2,000 people "still want to reach England."

Six months ahead of a presidential election in France, the camp and border controls with Britain are hotly debated campaign themes. Some right-wing opponents of President Francois Hollande want all the migrants transferred to Britain. Meanwhile, the far-right National Front party said the government plan would create mini-Calais camps across France.
Last Update: Oct 26, 2016 2:15 am
RELATED TOPICS