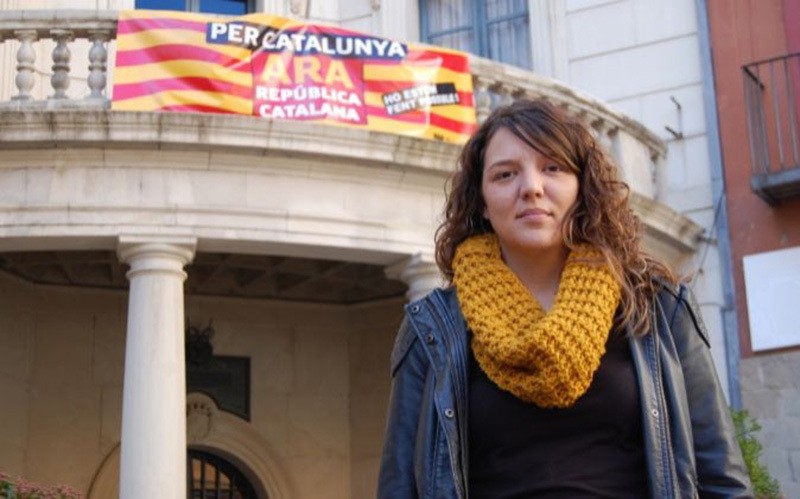 A Catalan mayor was detained by police in Spain early Thursday morning after refusing to remove the region's unofficial separatist flag - the estelada - from the local town hall.

Montserrat Venturos is the mayor of Berga, Barcelona, in the north-eastern region of Spain, close to the French border. She belongs to the far-left, separatist Candidatura d'Unitat Popular (CUP) Party.

Police arrested her at home for refusing to testify in court as part of an investigation into electoral fraud. The investigation began after she refused to remove the estelada flag from the town hall during regional and national elections.

Ada Colau, the left-wing mayor of Barcelona, tweeted: "Against the judicialization of politics, in defense of freedom of expression and municipal sovereignty: All my support for Venturos."

The flag has proved controversial in the past. European football's governing body FIFA fined Barcelona 150,000 euros in June after the club's fans flew the "political" emblem at matches.

Catalonia's separatist government has been working on a road map toward independence from Spain since it was elected in September 2015. Conflict between Spain and Catalonia is set to escalate over the next year, as the eastern region has vowed to hold an independence referendum next autumn, with or without Madrid's permission. On Thursday, Spain's Constitutional Court backed legislation that approved new powers to suspend public officials who do not comply with its decisions.

An independence movement has gathered pace since Mariano Rajoy first came to power in 2011 in Spain's wealthy northeastern region, Catalan.

To resolve the Catalan issue, the Spanish Socialist Worker's Party (PSOE) has called for reform to the country's constitution to adopt a more federal system. But changing the country's basic law could prove to be an uphill battle -- the document has only been adjusted twice since it was adopted in 1978, and alterations require support from two-thirds of lawmakers.

The region of 7.6 million people has long been enjoying prosperity and well-being in Spain's northeast with its own language and culture, compared to the Madrid government suffering from economic challenges including high unemployment rates and low average income. The economic crisis that hit Spain in 2008 has caused increasing tensions between the two parties, leading to a greater surge in support for separation. The Catalan government blamed the central government for much of Spain's debt crisis. Even though Catalonia lacks natural resources, it is Spain's richest and most highly industrialized region making the average income higher than the state-wide average with 27,300 euros a year.

Spain's leader Rajoy, who kicks off a second term after months of political paralysis, formed a new cabinet Thursday that looks set to maintain controversial economic reforms and cement EU ties. At the helm of a minority conservative government with little parliamentary support, Rajoy faces a daunting task as Spain seeks to consolidate its economic recovery and reduce its deficit under EU scrutiny, while grappling with separatism in Catalonia.