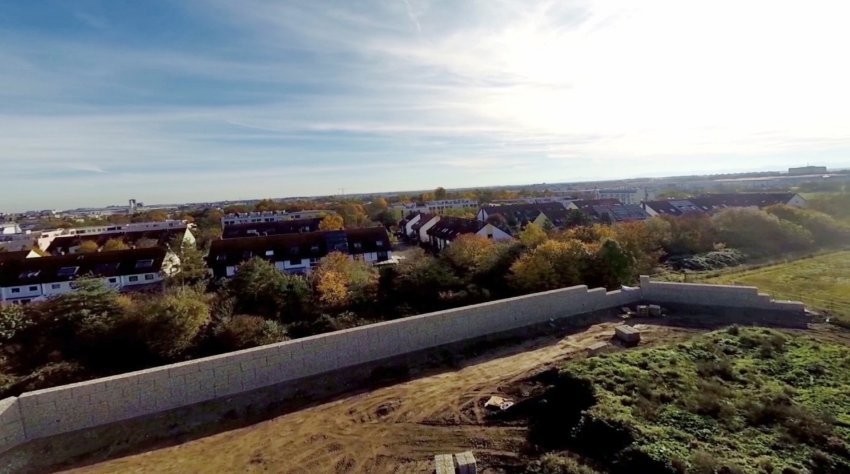 The screenshot from a video by a local politician shows the an urban settlement being separated from the planned site of refugee hostel.
by Compiled from Wire Services Nov 07, 2016 12:00 am

A wall separating residents in a Munich neighborhood from a planned refugee hostel was debated in Germany on Monday after a politician posted a video on YouTube of the concrete structure.

The 4-meter-high wall that runs 100 meters through the neighborhood of Neuperlach is nearing completion. It is meant to protect residents from the noise they expect will emanate from a refugee hostel on the other side. From early next year, the accommodation is set to house 160 unaccompanied minors seeking refuge in Germany.

City officials agreed to erect the wall several months ago as a concession to seven local plaintiffs who launched a legal bid to stop the construction of the refugee accommodation in early 2014. The video of the wall, taken by a drone, was uploaded on Friday by Guido Bucholtz, an independent politician who opposed its construction. He also distributed the footage to several local newspapers, prompting the video to be circulated more widely on Monday. "How can it be that you build a wall between residents and refugees with the meager justification of noise mitigation?" Bucholtz told DPA news agency. "This is a signal, you isolate the refugees because you don't want them around," he said. "Those who lock others out are locking themselves in," said Monika Steinhauser, the head of Munich's refugee council.

The German community has been polarized by the influx of some 890,000 asylum seekers last year with another 213,000 applying in the first nine months of 2016. Although fewer migrants have entered the country in 2016, parties on the far right have called for an immigration cap.

The Alternative for Germany (AfD) party has capitalized on the widespread discontent about the arrival of the large number of migrants, which it argues resulted from German Chancellor Merkel's promise of sanctuary to Syrian refugees.

In a move to alleviate tension in German society over the refugee policy, German Interior Ministry wants to stop migrants ever reaching Europe's Mediterranean coast by picking them up at sea and returning them to Africa, the Welt am Sonntag newspaper reported yesterday. In what would be a huge shift for a country with one of the most generous asylum policies, the ministry says the European Union should adopt an Australian-style system under which migrants intercepted at sea are sent for processing at camps in third countries. Headed by Thomas de Maiziere, a member of Merkel's conservative Christian Democrats, the ministry's proposal calls for migrants picked up in the Mediterranean - most of who set off from conflict-torn Libya - to be sent to Tunisia, Egypt or other North African states to apply for asylum from there.