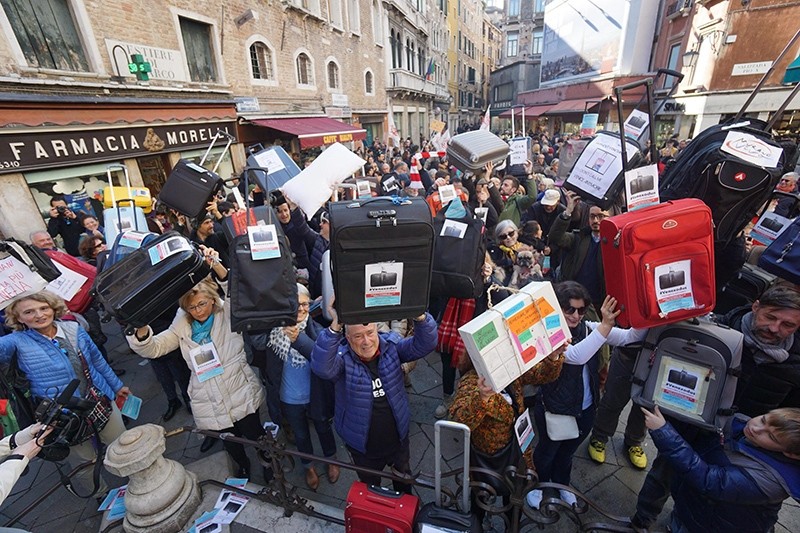 Residents of Venice hold luggages during the 'Venexodus' demonstrations in Venice, Italy, 12 November 2016. (EPA Photo)
by Nov 17, 2016 12:00 am
Dozens of Venetians waved maroon and yellow flags and carried empty suitcases on Saturday during a symbolic demonstration to highlight an exodus of residents from the lagoon city, where tourist hordes can make everyday life challenging.

Images of narrow Venetian alleys clogged with visitors during the All Saints holiday weekend filled Italian papers last week, rekindling a debate about limiting access to the city through a booking system.

Venetians have long complained that food shopping and other daily errands have become increasingly tricky as the city focuses on meeting the needs of the more than 20 million tourists who are estimated to visit it every year.

"We don't want to leave the city, we are Venetian, we want to live here so we are asking the City of Venice to help us to stay in Venice," he added.

Donning a red cloak lined with ermine fur and a brocade cap Castelli dressed up as the Doge, the historic leader of the Republic of Venice.

After leading a procession of people carrying a giant red cardboard suitcase and wheeling their own bags, the Doge climbed onto a gondola and symbolically left the city.

According to city resident Sebastian Giorgi, the city's population drops by about 1,000 per year.

Protesters hung a banner that read "#Venexodus" on the Rialto bridge and glued to their trolleys signs that said 'Without Venetians? Don't call me Venice anymore."

"Venice is a fragile city, fragile structurally and physically but also when it comes to its social fabric," resident Federico Permutti said.

"If you add to that the lack of housing for locals and a wild proliferation of accommodation offered to tourists, you can understand that the situation is unbearable for those who live here."