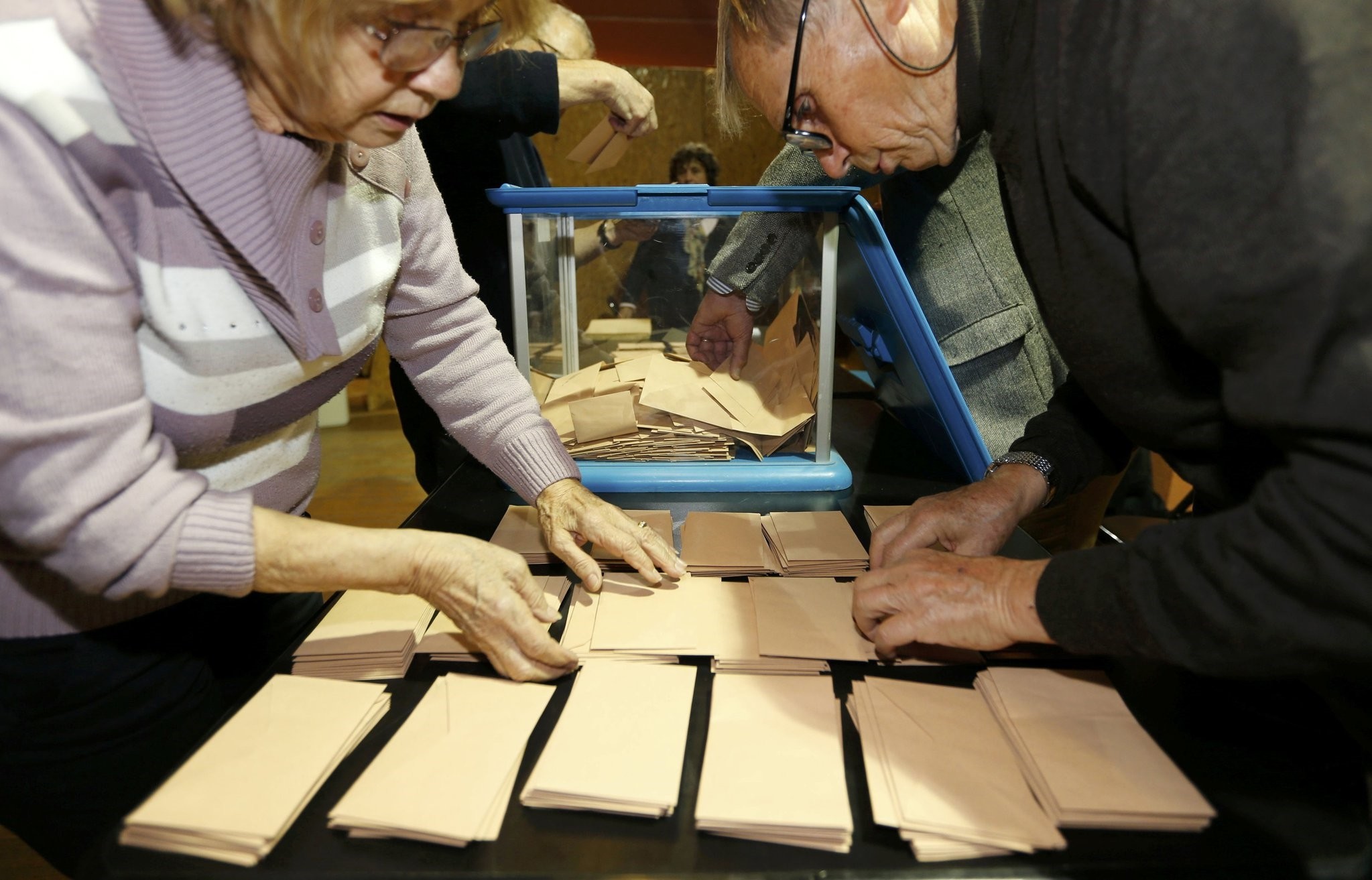 Officials stack envelopes containing ballots at a polling station in the first round vote of the French center-right presidential primary election in Bordeaux, France, November 20, 2016. (Reuters Photo)
by Associated Press Nov 20, 2016 12:00 am

Former French prime minister Francois Fillon took a strong lead Sunday while ex-president Nicolas Sarkozy conceded defeat in the first rightwing presidential primary to choose their nominee for next year's presidential election, after a campaign marked by concerns about immigration and terrorism.

Donald Trump's election as president of the United States was on many voters' minds, as France faces its own wave of populism that has emboldened an outsider with an eye on the presidency. Countries around Europe are facing similar anger at immigrants and the political establishment, and are watching the French presidential race closely.

Across France on Sunday, lines were long at many polling stations as voters chose among seven candidates competing in the first round. A runoff will be held between the top two vote-getters Nov. 27.

Organizers said more than 2.5 million people had voted by 5 p.m. in what they already consider as a "significant" turnout —out of France's 44 million citizens registered on electoral rolls. The 10,228 polling stations open across the country closed at 7 p.m. (1800 GMT) and organization teams started counting the votes.

The winner is expected to have strong chances of winning the April-May presidential election, because traditional rivals on the left have been weakened by Socialist François Hollande's troubled presidency.

The conservative candidate's main challenger may turn out to be far-right leader Marine Le Pen, who is hoping anti-immigrant, anti-Muslim and anti-establishment sentiment can propel her to the presidency. Le Pen, official candidate of her once-pariah National Front party, did not take part in the conservative primary.

The conservatives' campaign has focused on immigration and security concerns following recent attacks by terrorists.

The same issues are being hotly debated throughout Europe. Concerns about migration helped drive Britain's vote to leave the European Union, and are weighing on upcoming elections elsewhere. German Chancellor Angela Merkel is expected to announce Sunday her plans to seek a fourth term next year, as she seeks to counter populism after opening her country's doors to refugees.

Fillon — who has enjoyed a recent boost in popularity thanks to his image of authority and seriousness compared to Sarkozy's more brazen demeanor — pledges to organize a referendum on a quota system for immigrants.

In contrast, Juppe is advocating a more peaceful vision of French society, based on respect for religious freedom and ethnic diversity.

On the economic front, all candidates want to lower taxes — especially on businesses— and reduce the number of public servants. The leading candidates also agree on giving managers more flexibility by loosening the 35-hour weekly limit on employees' working time.

"I'm in a very good state of mind," he said. "We've had a very interesting first-round campaign ... a good democratic debate," he said.

Some voters expressed concern about xenophobia, while others expressed frustration at the political elite, media and polls that have proven wrong in the past.

"Maybe finally, we will definitively understand ... that one must listen to the people," Paris voter Paul Picquet said.

This is the first time French conservatives are holding a primary, making outcomes hard to predict. Candidates previously were designated via an internal procedure.

The Socialist Party organized France's first-ever primary in 2011, won by Hollande. Since winning the presidency the following year, his popularity has plunged amid economic stagnation and extremist violence. He hasn't said whether he will seek re-election.

All French citizens over 18 — whether they are members of the conservative Republicans party or not — can vote in the primary if they pay 2 euros in organization fees and sign a pledge stating they "share the republican values of the right and the center."

Other candidates are Nathalie Kosciusko-Morizet — the only woman on the conservative ballot; former government ministers Bruno Le Maire and Jean-François Cope, and Parliament member Jean-Frederic Poisson.