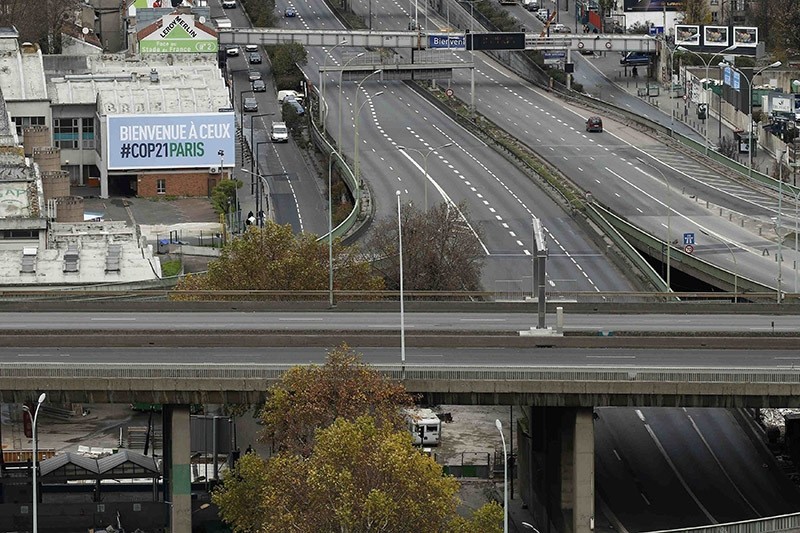 A view shows the Boulevard Peripherique (Paris' ring road) and the A1 motorway without traffic at Porte de la Chapelle in Paris, France in Nov. 2015. (Reuters Photo)
by daily sabah Nov 22, 2016 12:00 am

France's capital has become a nightmare for rich tourists as two Qatari sisters were relieved of millions in a highway heist while arriving in Paris on Tuesday.

Three masked thieves stopped a Bentley carrying two Qatari sisters on a highway north of Paris, sprayed their driver with tear gas and stole belongings worth as much as 5 million euros, French officials said Tuesday. An official familiar with the investigation said the sisters, aged 60 and 61, were targeted on the A1 highway en route to Paris' high-end 16th arrondissement after arriving in a private jet Monday night at the Le Bourget Airport. Two officials said the women told police the robbers fled with goods including jewelry, luxury fashions, leather goods and luggage.

Earlier this month, Bollywood actress Mallika Sherawat and partner Cyrille Auxenfans were the targets of a robbery attempt, also involving tear gas, in their home in a wealthy area of Paris. The robbers fled empty-handed.

In another incident, American reality TV star Kim Kardashian was tied up and robbed at gunpoint of $10 million in jewels in a luxury apartment in the heart of Paris. Police said the robbers held a gun to Kardashian's head, bound and gagged her and shut her into a bathroom in the biggest jewelry robbery of an individual in France in more than 20 years.

In 2014, a Saudi prince's diplomatic convoy was ambushed in a heist similar to Monday's one, as it headed to Le Bourget Airport, commonly used for private jets.

The city has long been struggling to reassure tourists and restore hotel bookings since the deadly terrorist attacks of a year ago. Bookings of flights into France dipped 8.1 percent over the first nine months of 2016 versus the same period a year earlier, and more heavily than that in the wider Paris region. Following the shootings at satirical magazine Charlie Hebdo and a Jewish supermarket in January 2015, France deployed more than 10,000 soldiers to patrol the streets, mostly around Paris.

The deployment was scaled back a few months later, but returned again after the Nov. 13 attacks. In Paris, it was common to see patrols of armed soldiers walking through the streets. Private security guards have become prevalent throughout the French capital, and bags are often checked before entering the city's major department stores, museums or monuments. While the sight of soldiers is still common, and the tourism sector has taken a substantial hit, visitor numbers to the city are down over 10 percent.

As the city suffers from low tourist rates, the French government earlier this month unveiled a 42-million-euro plan to boost security in tourist areas. Paris also launched a three-pronged attack aiming at revitalizing its tourist experience.