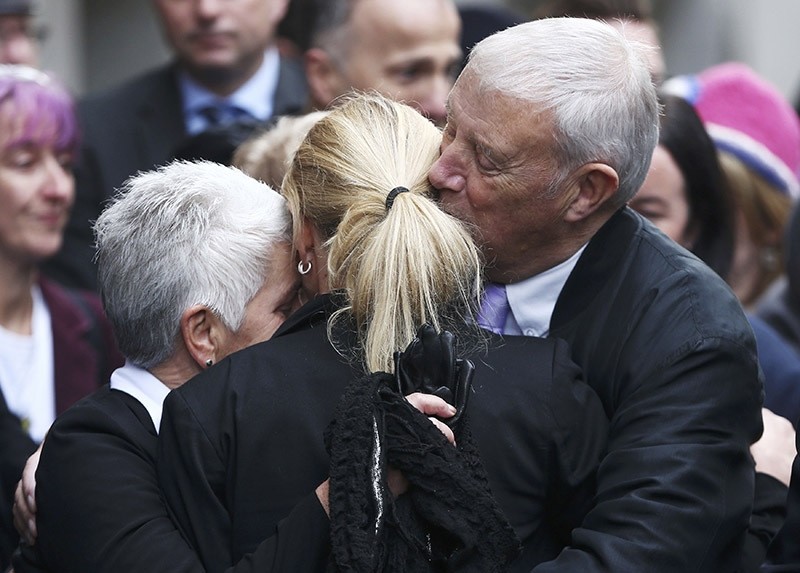 MP Jo Cox's family embrace outside the courthouse after the conviction and sentencing of Thomas Mair. (Reuters Photo)
by German Press Agency - DPA Nov 23, 2016 12:00 am

A far-right extremist who shouted "Britain first" as he shot and stabbed a British lawmaker a week before the Brexit vote was Wednesday found guilty of her murder and jailed for life.

Thomas Mair, 53, murdered Jo Cox, a rising star in the Labour Party and a fierce campaigner on behalf of continued British membership in the European Union, in the town of Birstall on June 16.

The jury took just over an hour to find Mair guilty of murdering Cox.

The 41-year-old legislator from Yorkshire in northern England had been rallying Britons to vote against Brexit, one week before the referendum.

The judge refused Mair's request to make a statement in court, telling the defendant that his attack was "brutal and ruthless," and that Cox was the "true patriot" and not him, the Press Association reported.

The court heard that Mair's attack was politically motivated and that he had a stash of neo-Nazi material in his home, as well as a dossier on Cox.

Mair was also found guilty of intentionally causing "grievous bodily harm" to a 78-year-old man who tried in vain to save mother-of-two Cox.

Widower Brendan Cox told the court after the verdict that "we are not here to plead for retribution," according to PA.

"We feel nothing but pity for him that his life was so devoid of love and filled with hatred, his only way of finding meaning was to attack a woman who represented all that was good about the country in an act of supreme cowardice," Brendan Cox said.

The defendant declined to give evidence in his defence after the prosecution concluded its arguments on Tuesday.

The judge entered a not guilty plea on Mair's behalf before the trial began as he refused to speak at his plea hearing other than to confirm his name.

Cox was the first woman to have been murdered while serving as a member of British parliament, and the first British lawmaker murdered since Ian Gow, a Conservative who was killed by an Irish Republican Army bomb in 1990.