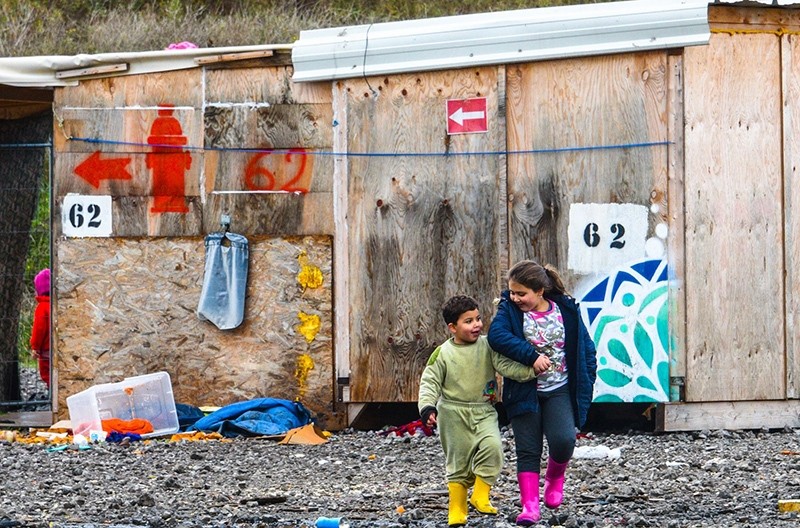 Children walk at a camp for migrants and refugees in Grande-Synthe, northern France, on November 18, 2016. (AFP Photo)
by reuters Nov 24, 2016 12:00 am
Nearly one in three migrant children tracked by a refugee charity have gone missing since the "Jungle" camp in the northern French town of Calais was dismantled in October, the organization said on Wednesday.

Refugee Youth Service said it could not locate a third of the 179 child migrants it had been tracking since authorities bulldozed the Jungle, home to up to 10,000 people fleeing war or poverty in the Middle East and Africa.

The fate of children staying in the squalid camp where migrants converged in the hope of making it across to Britain, has been a political problem for the British government.

Religious leaders, refugee rights campaign groups and opposition parties have accused Britain of dragging its heels in helping to deal with unaccompanied children.

Refugee Youth Service, which has worked in the Calais camp since November last year, said a lack of information and widespread misunderstanding about what will happen to them had led to many children disappearing.

"These are some of the most vulnerable children in the world, they have been let down time and time again," said the charity's co-founder Ben Teuten in a statement.

"When they disappear we are extremely concerned that they will be preyed upon by traffickers and are unlikely to seek state support due to their treatment to date."

Earlier this month, the French authorities began moving about 1,500 unaccompanied child migrants from the Jungle to reception camps across the country.

Josie Naughton, who helped to set up another charity, Help Refugees, said many migrant children were frightened.

"Being placed somewhere that you don't understand - where you don't necessarily have access to translators or social workers - and not knowing how long you'll be there, that triggers a natural instinct to take control of your own life," she told the Thomson Reuters Foundation.

Migrant children have two legal routes into Britain. One is under European Union rules that allow for children to be reunited with relatives already in the UK.

The other is under the so-called Dubs amendment to the Immigration Act which allows the most at-risk child refugees in Italy, Greece and France to be taken to the UK for sanctuary.

Refugee Youth Service called on the French and British governments to provide clearer information to child migrants, and urged the authorities to report children as missing when they disappear from reception centres.

A Home Office spokesperson told the Thomson Reuters Foundation by email that "we have made significant progress in improving and speeding up the existing processes since the beginning of the year, but the primary responsibility for unaccompanied children in France lies with the French authorities".