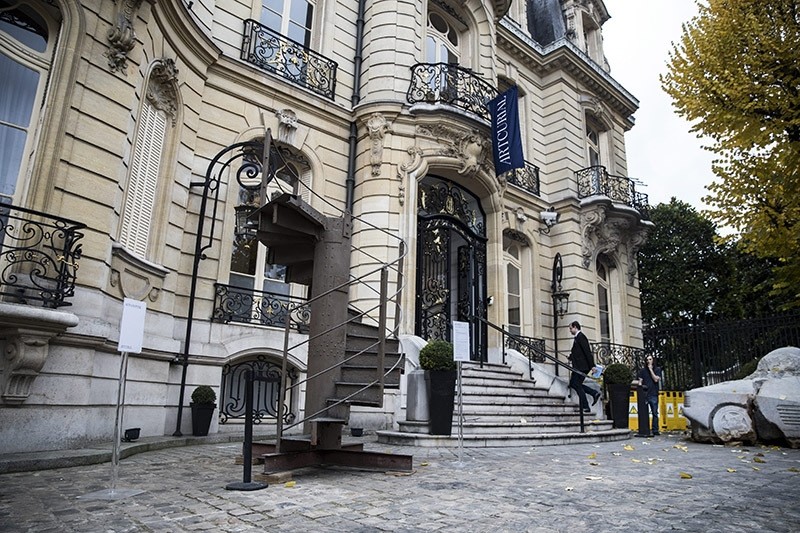 A section of stairs from the Eiffel Tower in Paris sold for more than half a million euros, auctioneers said Wednesday -- more than 10 times the pre-sale estimate.

The 14 wrought-iron steps from a winding staircase between the second and third floors of the Paris landmark went for 523,800 euros ($556,000) after furious bidding at the sale in the French capital.

Auction house Artcurial said the dramatic sale on Tuesday had "unleashed the passions" of several international buyers, with bids rising rapidly from 20,000 euros, leaving the 40,000 euro estimate far behind.

The prize eventually fell to a telephone bid from an Asian buyer.

Auctioneer Francois Tajan said "the battle over the phone and in the auction room for the stairs showed the profound attachment there is for a monument that is so emblematic of French culture."

The stairs date from 1889 when the legendary French engineer Gustave Eiffel built the 324-metre (1,063-foot) edifice as the centrepiece of the Paris Universal Exhibition.

It soon became the most iconic feature on the Paris skyline, and is France's most visited monument despite suffering calls for its demolition in the years after the exhibition.

It is still the country's third tallest structure, and was the highest building in the world for 41 years until the construction of the Chrysler Building in New York in 1930.

The stairs were removed from the tower in 1983 to make way for a lift and cut into 24 sections, ranging from two to nine metres high.

Several were bought by museums while others ended up in the gardens of the Yoshii Foundation at Yamanashi in Japan, beside the Statue of Liberty in New York and at Walt Disney World in Florida, next to its copy of the Eiffel Tower.

Tajan said he was particularly "moved by the sale... having watched the first sale of the staircases in 1983 which was presided over by my father Jacques Tajan."

Although the Eiffel Tower stairs fetched "an exceptional price", the highest from the sale of Art Deco artefacts was four monumental sculptures by Georges Saupique which went for 1.24 million euros.

Saupique is best known for his bust of Marianne, the woman who symbolises the French republic.