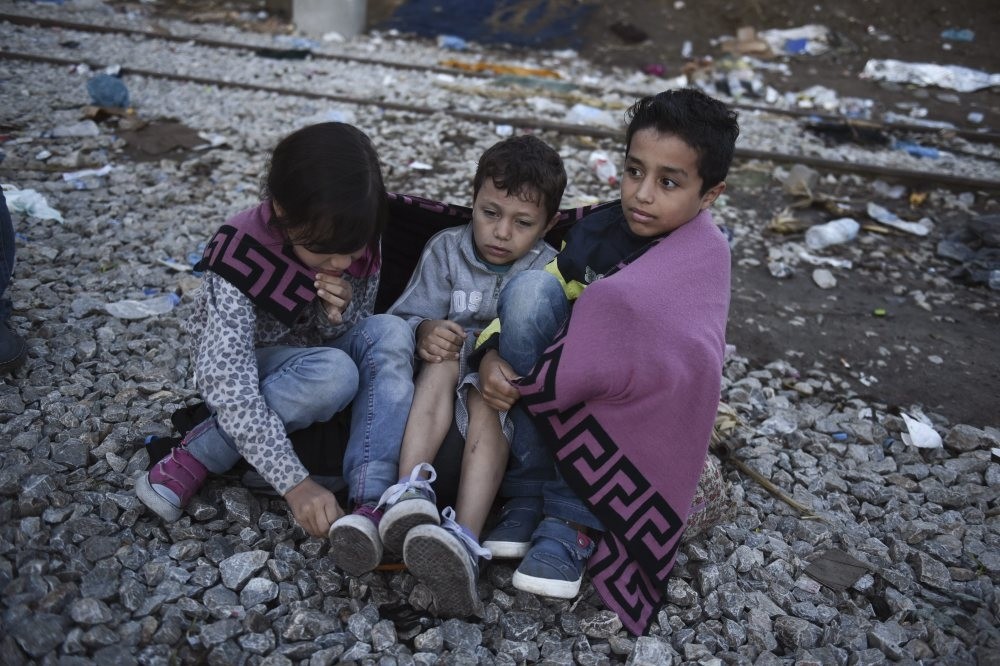 Syrian children as they wait to cross the border from the northern Greek village of Idomeni to southern Macedonia in September 2015.
by Yunus Paksoy
Nov 25, 2016 12:00 am

More than 10,000 missing innocent child victims of conflicts around the world, including the Syrian civil war and the instability in Iraq and Afghanistan, are feared to have been sexually and physically abused in EU countries. EU authorities have been unable to shed light on the fate of unaccompanied migrant children

Since the outbreak of the Syrian civil conflict that turned into a ruthless war campaign by Bashar Assad, millions of people fled the country and more than 500,000 people are believed to have been killed.

In Assad's campaign, which consists of serious war crimes, children are the most obvious and innocent victims. Many of those who felt lucky to have fled Assad's war crimes by leaving Syria were drowned or exposed to inhumane treatment at the European borders.Apart from that, more than 10,000 migrant children are reportedly missing in Europe. Recently, the French government decided to sweep out the Calais migrant camp, also known as the Jungle.

Despite migrants' resistance in the face of the decision, the government went on to destroy the tents in the area, leaving thousands of migrants on the streets.

A recent report by the aid organization Refugee Youth Service (RYS) said that one-third of migrant minors from the Calais camp are missing. The RYS criticized the French authorities for not reporting the missing children.

Commenting on the issue, RYS co-founder Ben Teuten said, "We saw it in the southern evictions in March, where 129 children are known to have disappeared, and are witnessing it again now."

The EU police agency Europol said in late January that more than 10,000 unaccompanied children were missing within the EU borders. "It's not unreasonable to say that we're looking at 10,000-plus children," the agency's chief of staff Brian Donald had said at the time.

UNICEF says, "A third of children who are victims of violence are likely to develop long-lasting symptoms of post-traumatic stress disorder."

Recently, Yvette Cooper, chair of the Commons home affairs committee in Britain said: "At a time when children have become the biggest casualties of the refugee crisis facing abuse, exploitation and abandonment, action is needed by all European governments to support children and teenagers."

Germany is feared to be a bitter scene for migrant child abuses. Germany's Federal Criminal Police Office (BKM) shared that around 9,000 minor migrants had gone missing by July 1 of this year. The number is believed to have increased by now.

According to the European Commission, missing unaccompanied children are the responsibility of individual EU member states. However, if a migrant child is reported missing in Greece and authorities assume that he or she is taken to Germany via Austria by human traffickers, it remains unknown which country will handle the situation.

Thirty-three migrant children, some of whom are now feared to be missing after leaving the Calais camp, were interviewed by a British charity group called Safe Passage recently. Many of the children said that they did not "feel safe" at the camp.

Sweden is another European country in which migrant children have been reportedly abused. Unaccompanied migrant children who sought asylum in Sweden are forced to sell sex, a popular Swedish daily claimed in mid-August.According to a report by the Swedish daily Aftonbladet, orphaned refugee children in Malmö city were sexually exploited. It is estimated that there are about 30,000 unaccompanied refugee children in the country.

As the EU and EU governments remain silent over more than 10,000 unaccompanied migrant children, fears that the children are abused and used in slavery, prostitution and other illegal activities are mounting.