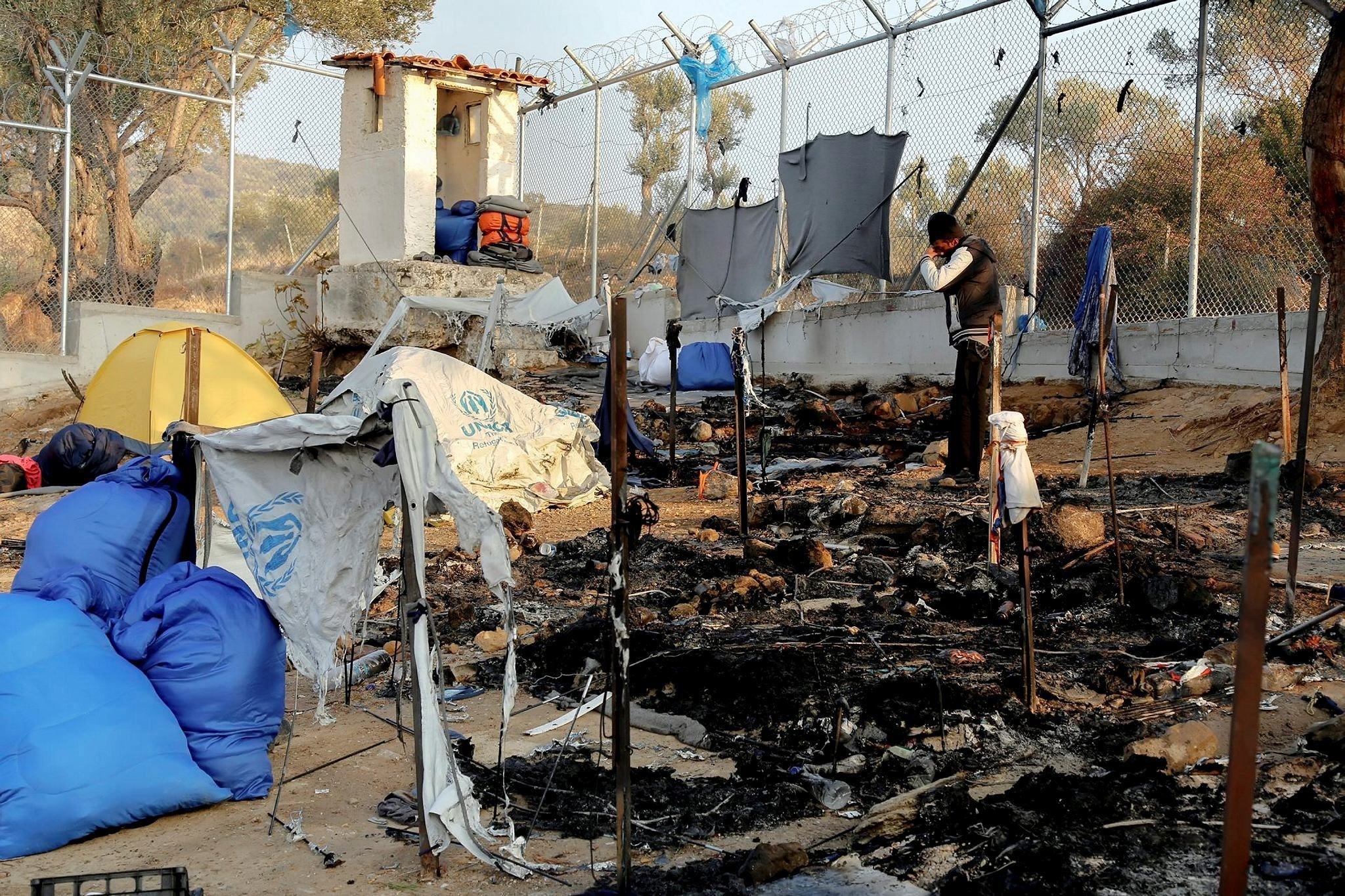 A migrant stands among the remains of a burned tent after a fire broke out at the Moria migrant camp, on the Greek island of Lesbos, Greece, Nov. 25.
by Compiled from Wire Services Nov 26, 2016 12:00 am

After a fire killed a mother and a child and badly burned two more in an overcrowded deportation camp on the island of Lesbos, migrants set fire to part of the camp in protest over the devastating living conditions

After the deaths of a woman and child in a fire erupted in a refugee camp, migrants set fire to part of the camp in an apparent act of rage. Ensuing clashes between migrants and police left six migrants slightly injured, while several more were taken to Lesbos hospital with lesser burns and respiratory problems. Greece's prime minister expressed shock Friday at refugee deaths while pledging to improve conditions in migrant camps.

Greek PM Alexis Tsipras said he was "shocked, as is the entire Greek nation, by the tragic event" in the Moria camp on Lesbos overnight. The aid agency International Rescue Committee described the deaths as "a damning indictment of the ineptitude of European leaders' response to the refugee crisis."

Police said a cooking gas canister sparked the fire, and that the victims were a young boy and an older woman. Another woman and a second child were severely injured and flown to Athens, where they were hospitalized in serious condition, while several others were less seriously hurt.

Panos Navrozidis, the IRC's country director for Greece, said in a statement that the group had already warned of the dangers of overcrowded conditions in Greek camps, and about conditions in Moria. "As a humanitarian, it is soul-crushing to see events like this happen within the European Union," he said. "It is an abdication of our responsibility as global leaders that we, in Europe, refuse to do better for some of the world's most vulnerable."

Protests have repeatedly occurred at overcrowded deportation camps. Under a deal reached in March between Turkey and the European Union, migrants arriving on Greek islands from Turkey face deportation back to Turkey unless they successfully apply for asylum in Greece. The deal was designed to stanch the flow of hundreds of thousands of refugees and migrants into the European Union via the Aegean Sea route.

While the number of people arriving on Greek islands has dropped significantly as a result, it has not stopped altogether. Thousands of people are stranded in severely overcrowded camps on the islands, leading to tension within the camps as well as with locals. In total, more than 62,000 people are stranded in Greece, while an EU agreement to relocate tens of thousands of them to other European countries is suffering severe delays.

Several fires have erupted in refugee camps on the Greek islands, where some 16,000 people became stranded after the European Union signed a deal that was aimed at stemming the influx of migrants. Moria has a capacity for 3,500 people but currently houses more than 5,000. Part of the camp was badly damaged in a fire on Sept. 19 during clashes between migrants and police, and thousands had to be moved out before returning two days later.
RELATED TOPICS