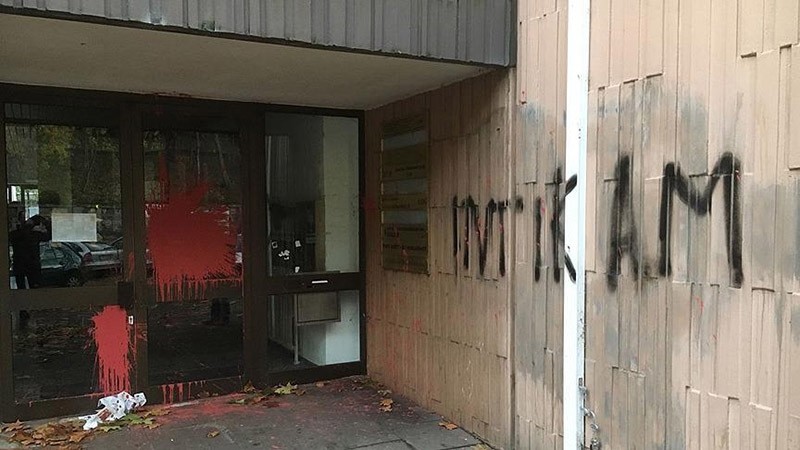 The attacks reportedly caused serious damage to the buildings.

The terrorist organization's sympathizers accepted responsibility for the crimes, and even published the videos of the FC Türkiye attack on the internet.

Club officials stated that a worker, who was sleeping inside the club building when the attack happened, would have probably faced smoke poisoning, if the fire had not extinguished itself.

FC Türkiye official Doğan Inam stressed that the police should take the crime seriously and investigate the incident to find the criminals by identifying the IP address that published the attack videos online.

"These people need to be tried for attempted murder," he added.

Inam also explained that the sports club was presented with a "Harmony Award" last year for being a multicultural club that welcomes everyone, regardless of their ethnicity or religion.

In the Eimsbüttel district of Hamburg, PKK supporters smashed the windows of the Turkish cultural center and smeared the walls with threatening messages.

The perpetrators vandalized the Ali Pasha Mosque in the city of Quickborn, which is located 30 kilometers (18.6 miles) from Hamburg, in Schleswig-Holstein.

The Confederation of Turks in Europe Chairman Cemal Çetin condemned the attacks and said:

"We want the attackers to be identified and brought to trial. Only in this way can future attacks be prevented. Our federation will not respond to provocations. We will continue our fight against terror, and anything that threatens social peace, with democratic measure."

Though the PKK is on the EU's official terrorist-organization list, Turkey has complained about member states' indifference towards the terrorist group. Ankara argues that, although EU leaders condemn the PKK terror in rhetoric, the activities of the group in the EU countries contradict the EU authorities' stance.