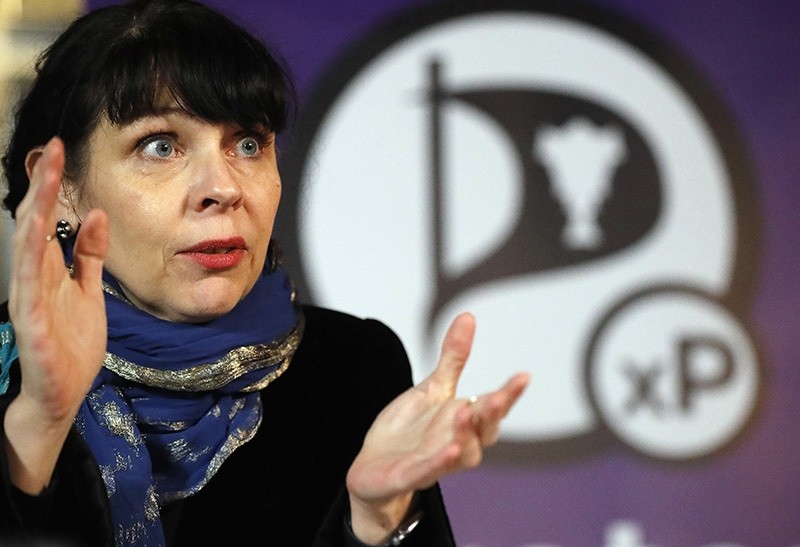 In this Sunday, Oct. 30, 2016 file photo, Birgitta Jonsdottir of the Pirater (Pirate) Party addresses the media during a conference in Reykjavik, Iceland (AP Photo)
by Associated Press Dec 03, 2016 12:00 am

Iceland's anti-authoritarian Pirate Party took the helm in talks to form a new coalition government for the island nation Friday, after two earlier rounds of negotiations broke down.

No party won an outright majority, and President Gudni Johannesson asked the first-placed Independence Party and then the second-placed Left-Greens to try to assemble a coalition. Both failed.

On Friday, Johannesson asked senior Pirate lawmaker Birgitta Jonsdottir to try to assemble a government with other parties, the president's office said.

The Pirate Party, founded four years ago by an assortment of hackers, political activists and internet freedom advocates, tripled its vote and won 10 seats in Iceland's 63-seat Parliament in October.

The tax-avoidance scandal was the latest political shock in the volcanic North Atlantic nation, which suffered years of economic upheaval after the country's debt-swollen banks collapsed during the 2008 global financial crisis.

The Pirates' digital radicalism has garnered international headlines; Jonsdottir is a former ally of WikiLeaks who has called on Iceland to offer citizenship to National Security Agency leaker Edward Snowden.

But the sticking points in government talks are more domestic. The major issues to be resolved include health-care reform and fishing rights, according to Jonsdottir.

The Pirates will hold talks with four other parties on the center and left of the political spectrum.