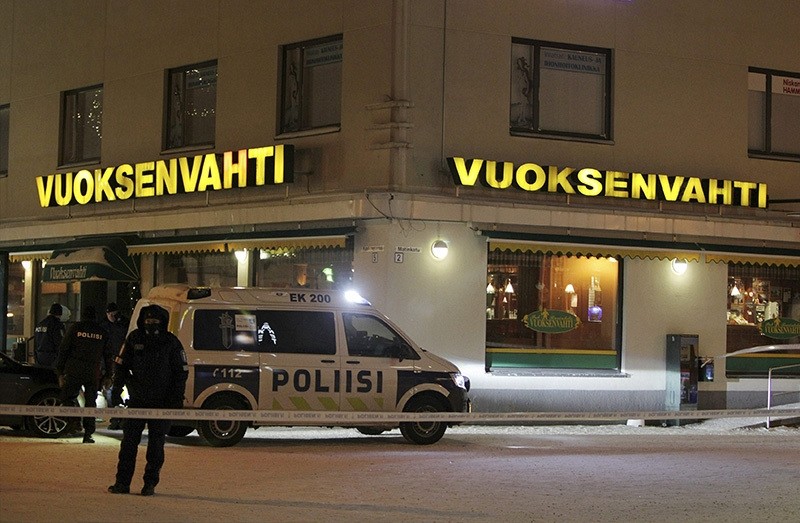 Police guards the area were three people were killed in a shooting incident at a restaurant in Imatra, Eastern Finland after midnight on December 4, 2016. (Reuters Photo)
by Dec 04, 2016 12:00 am

A lone gunman shot dead a local official and two journalists, all of them women, in a night-time attack Saturday in a small town in Finland, a country with one of the highest rates of gun ownership in the world.

Police said Sunday they believed the 23-year-old suspect, who was swiftly arrested after the shooting, acted alone and initial indications were that there was no political or extremist motive.

The attack took place as the women were leaving a restaurant in the southeastern lakeside town of Imatra near the Russian border, and police said they may have been targeted at random.

Investigators identified the victims as the head of the municipal council and two local reporters, the SST news agency said.

A police statement said the women had died at the scene after being shot at close range, sustaining gunshot wounds to the head or the torso.

The suspect, a local man, did not put up any resistance to his arrest and the weapon was found in the boot of his car.

The gun belonged to an unidentified third person who had a hunting license, police said, indicating that the inquiry would seek to establish how it was in the suspect's possession.

Finland enjoys relatively low crime rates compared to other European nations but, with many Finns keen hunters, it has one of the biggest gun ownership rates in the world.

The suspect, who already has a record for violence, was interrogated by police on Sunday but his motive remains unclear, with investigators saying he could have picked his victims at random.

There was no initial indication that the triple murder was "linked to political issues or extremism", police said, adding that they were not looking for any other suspects.

Imatra mayor Pertti Lintunen confirmed to SST that Tiina Wilen-Jappinen, the local council's Social-Democrat leader who was in her early 50s, was among the victims.

The names of the two journalists, one of whom was of a similar age while the second who was in her mid-30s, were not released.

In a posting on its website, Imatra town council said it had set up a counselling facility for residents.

Finland has seen several deadly shootings over the past decade, all by young men.

Figures in the Small Arms Survey, carried out by the Graduate Institute of International and Development Studies in Geneva, found Finland to be fourth in the civilian gun-ownership ranks, behind the United States, Yemen and Switzerland.

In November 2007, eight people were killed in a high school north of the capital Helsinki by an 18-year-old who later killed himself.

Less than a year later, a 22-year-old shot and killed 10 students in a classroom at a cooking school in the western city of Kauhajoki.

And in May 2012, two people were killed and seven more wounded after a shooting near Helsinki by another 18-year-old. The attacker is currently serving life in prison.

Imatra is a small lakeside town of 27,500 people in southeastern Finland, just a few kilometers (miles) from the Russian border.