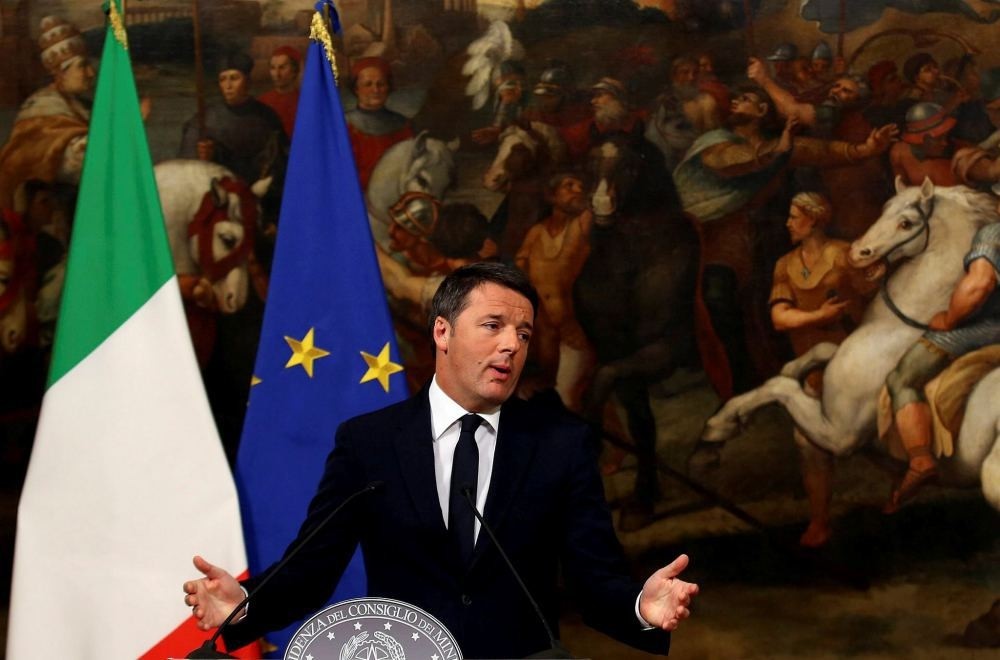 Italian Prime Minister Matteo Renzi speaks during a media conference after a referendum on constitutional reform at Chigi palace in Rome, Italy, Dec. 5. (Reuters)
by Daily Sabah Dec 06, 2016 12:00 am

Italy's ‘no' vote on the constitutional referendum is a landmark victory for populist movements following the Brexit vote and Donald Trump's victory, further rattling the EU

The European Union, already reeling from the unprecedented Brexit vote, ongoing refuge crisis, increasing far-right populism and economic instability, now faces a new Italian blow after Prime Minister Matteo Renzi lost a referendum on proposed constitutional changes. The resounding "no" from Italian voters to Prime Minister Renzi sent a clear warning to European leaders as uncertainty rises in the European continent while struggling to respond to the Brexit and U.S. President-elect Donald Trump. As 60 percent of voters rejected his proposals and signaled they wanted a change in political direction, Italians triggered Prime Minister Renzi's resignation announcement and galvanized the populist, eurosceptic opposition 5-Star Movement's determination to gain national power in a snap election. The referendum outcome also energized the anti-establishment parties while clearing the way for a possible "Italexit." In voting no, Italians paved the way for possible further disintegration of the European Union, as the vote dramatically weakened European integration. Following Renzi's resignation, Sandro Gozi, the Italian minister for European affairs stated that Renzi's government was one of the major actors for relaunching the European Union project that suffered mostly from the Brexit vote.

As the opposition parties were united in antipathy for Renzi's policies and reform course, "The people have won," Matteo Salvini, head of Italy's anti-immigrant Northern League party said on Twitter. France's far-right Front National party's leader Marine Le Pen also congratulated Italian far-right groups on their "victory." Together with a sluggish economy, the influx of refugees to European borders and unresponsiveness of the EU to stop the migrant flow has been one of the major reasons for rising anti-establishment far-right parties in Europe. The former far-right U.K. Independence Party (UKIP) leader Nigel Farage, who spearheaded the "Brexit" campaign, said the vote looked "more about the euro than constitutional change."

Amid deep-seated divisions over migration and border security, military cooperation and economic policy, Europe has long been in danger of breaking apart. Immigration was one of the main drivers of the U.K. vote on June 23 to leave the EU. The Brexit vote in June ended more than half a century of EU enlargement and closer integration. Long seen as a guarantor of peace and prosperity, the bloc is now in critical condition as member states cannot find common ground to tackle problems, while struggling to convince its citizens that it remains a force for good. Regarding the ongoing refugee crisis that left the EU unresponsive to the crisis, Italy has been on the migrant crisis frontline and played a significant role in preventing problems caused by tens of thousands of migrants arriving on European shores from Africa. Together with Greece, Italy has become Europe's major migrant and refugee point of entry with close to 160,000 arrivals this year.

As eurosceptics are delighted with Renzi's resignation, European leaders sent their concerns over the crushing referendum defeat. German Foreign Minister Frank-Walter Steinmeier said the referendum result was "not a positive message to Europe at a difficult time." Meanwhile, some EU authorities played down the impact of Italy's referendum on European unity. EU Finance Commissioner Pierre Moscovici has "full confidence in Italian authorities to manage this situation." French Finance Minister Michel Sapin said the Italian referendum "is a question of internal politics. The referendum wasn't about Europe."

The "no" votes were leading the "yes" votes by a 6-to-4 margin, according to data released by the Interior Ministry. The turnout of 67 percent was especially high for a referendum and more in line for a vote for Parliament. The constitutional reform proposed drastically diminishing the powers of the upper house senate, leaving most of the decision-making in the hands of the lower house. It will strip the senate of its ability to bring down the government, cut the number of senators from 315 to 100. The referendum would give Italy a stronger government, guaranteeing a big majority to the winning party and giving party bosses wide authority to handpick candidates.
RELATED TOPICS