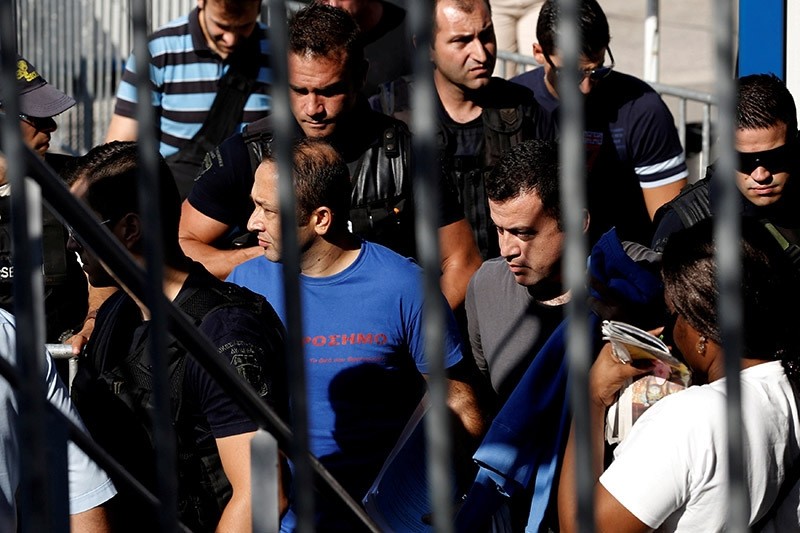 Two of the eight coup plotters are escorted by special police forces after the postponement of their interviews for asylum request at the Asylum Service in Athens, Greece, July 27, 2016. (Reuters Photo)
by Daily Sabah with Reuters Dec 06, 2016 12:00 am

A Greek court decided on Tuesday to extradite three soldiers linked to the Gülenist terror cult (FETÖ), who fled to Greece after a failed coup against President Tayyip Erdoğan in July, one of their lawyers said.

The three pilots were among a group of eight Turkish soldiers who fled to northern Greece in a helicopter and sought political asylum.

The court ruled that the thee pilots should be returned to Turkey to stand trial for three of the four crimes they committed, but not for attempting to kill President Erdoğan, lawyer Stavroula Tomara told Reuters.

The pilots have appealed the ruling at the country's top court, she added.

On Monday, the same Greek court ruled that three other Turkish soldiers should not be returned home. However, a Greek attorney general objected to this decision. The court is also expected to decide the fate of the remaining two soldiers on Thursday.

The eight soldiers affiliated with FETÖ, including three majors, three lieutenants and two sergeant majors, fled Turkey on a Sikorsky helicopter and landed in Alexandroupolis (Dedeağaç), on the night of July 15 when they realized the coup had failed.

The asylum requests of three soldiers were initially rejected by Greece and they were sentenced to two months in jail by a Greek court for entering the country illegally.

Shortly after the coup attempt, Greek Prime Minister Alexis Tsipras telephoned President Recep Tayyip Erdoğan to confirm that "whatever is necessary" would be done to ensure the extradition of the eight Turkish military officers who fled to Greece after Friday's failed coup attempt.

On July 15, a military junta loyal to FETÖ carried out a bloody coup attempt, killing more than 240 people and injuring nearly 2,200.