UK only has 18 months to strike Brexit deal, EU warns 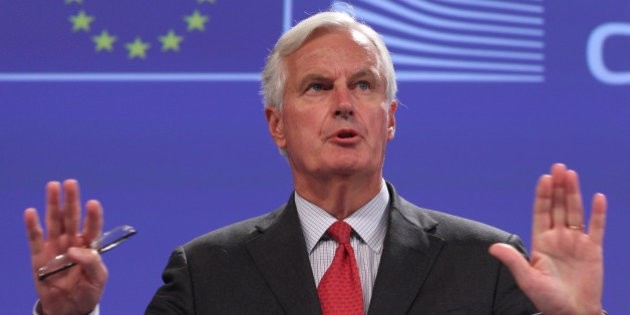 Britain hasn't got two years to negotiate its divorce from the European Union after all.

The EU's chief negotiator on Brexit warned Tuesday that the country will have less than 18 months once talks begin and that it won't be allowed to pick and choose what parts of the EU it wants to keep.

While steering away from specifics on what a Brexit deal might look like, Michel Barnier, who took up his post two months ago after Britain voted in June to leave the EU, said formal procedures at the start and the end of the talks will cut into the time Britain has to leave the 28-nation bloc.

"Time will be short," he said. "All in all there will be less than 18 months to negotiate."

British Prime Minister Theresa May wants to invoke by the end of March Article 50 of the EU Treaty, which will officially kick off two years of exit talks.

But Barnier, who has visited 18 EU member states to gauge views on Britain's withdrawal, warned that the effective negotiating time will be less due to procedural formalities such as parliamentary approvals to rubber-stamp any deal.

If May sticks to her timetable, Barnier said an agreement may have to be secured by October 2018 to get a final agreement in place by March 2019 — two years on from the triggering of Article 50.

"That timeframe seems to me to be absolutely ample," he said on arriving for a meeting of NATO foreign ministers in Brussels.

It's a fluid situation, not least because a British court ruled last month that Parliament needs to give its approval before the government can trigger Article 50. The government is contesting that ruling in the Supreme Court. Should Britain's highest court confirm Parliament's involvement, May's plans could be delayed.

Barnier, who spoke in English and French, sought to dampen talk that Britain could "cherry-pick" what it likes about the EU, noting that the single market and its four freedoms, such as the freedom of movement, are "indivisible."

"This will be the atmosphere in which we will be conducting our negotiations with the U.K. and the sooner the better," he said. "We are ready; keep calm and negotiate."

German Chancellor Angela Merkel said that sort of deal is off limits.

"The internal market threatens to be weakened by negotiations on Brexit," Merkel told a congress of her conservative Christian Democratic Union in Essen. "We will not allow cherry-picking. The four fundamental freedoms must be preserved."

Given that it takes many years to conclude wide-ranging free trade deals — Canada recently completed one with the EU after seven years — there's been speculation that Britain and the EU might forge a transitional arrangement that would see Britain pay into the EU budget in return for access to the single market.

Barnier indicated there may be "some point and usefulness" to some sort of transitional arrangement.

"It is for the British to say what kind of relationship they want and for the 27 EU states to define the future they want to build with them," he said. "You can't do everything in 15 to 18 months of negotiations."

The British government has been reluctant to reveal much about what sort of post-Brexit relationship it is looking for out of fear that it would weaken its hand in negotiations. May came up with a new catchphrase Tuesday, saying: "I think what we should be looking for is a red, white and blue Brexit," she told reporters in Bahrain, without elaborating on what that might look like.

The British government's opaque approach has frustrated many in Europe.

Jeroen Dijsselbloem, the Dutch finance minister who also chairs meetings of the 19 EU countries that use the euro, said the proposals he's seen so far "are incompatible with smooth and incompatible with orderly."

Earlier, Britain's finance chief said all options remained on the table, including the possibility that the country may continue paying into EU coffers for single market access. Leaving the EU single market would be a blow to many British businesses that would face new tariffs on trade.

"I think that it's in everybody's interest on both sides of the English Channel to have a smooth a process as possible that minimizes the threat to European financial stability and minimizes the disruption to the very many complex relationships that exist between European manufacturing businesses and their financing banks and so on in London," he said.