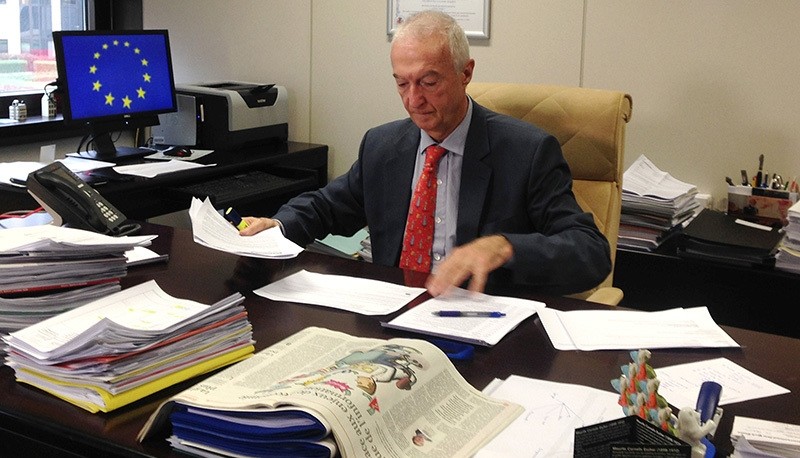 European Union's Counter-Terrorism Coordinator Gilles de Kerchove is seen during an interview with Reuters in his office in Brussels (Reuters Photo)
by Dec 07, 2016 12:00 am
The European Union must improve information-sharing internally and with the United States and Turkey to better track Europeans returning from fighting with Daesh, the EU's counter-terrorism official will tell interior ministers.

EU home affairs chiefs will discuss in Brussels on Friday how to increase their ability to intercept such returnees after Daesh sent back radicalized Europeans to carry out attacks on targets in their home countries.

Gilles de Kerchove, the EU's Counter-Terrorism Coordinator, estimates there are some 2,000-2,500 European "foreign terrorist fighters" still in Syria and Iraq.

Between 600 and 1,000 such people have been killed in the conflicts there and another 1,200-1,750 have already returned to Europe, according to a document de Kerchove will present to the ministers and which was seen by Reuters in advance.

"It is important to share information on returnees who are already back in Europe, those that are in transit and ... (those) still in the conflict zone," it says.

"There are largely two categories of returnees: those in the majority who will drift back and those who will be sent back on specific missions, which are of most concern."

He did not expect a mass wave of returnees but has previously warned that Daesh will attack Europe again.

De Kerchove said the EU should seek to have more information collected on the frontlines in Syria and Iraq by the United States and also urged member states to update their joint data bases more regularly, including with biometric data.

The EU could also step up cooperation with Turkey, the main route to Europe for returning fighters, and should upgrade rehabilitation and reintegration programs "both inside and outside of prison" for those who do return.

In his report to the ministers, de Kerchove singled out Telegram - an encrypted messaging application set up by a Russian - for the EU's poor response to radical content, saying it allowed "the abuse of its platform by terrorists and ... sympathisers".

Other proposals to consider include offering repentant returnees a more lenient treatment if they provide information to law enforcers.