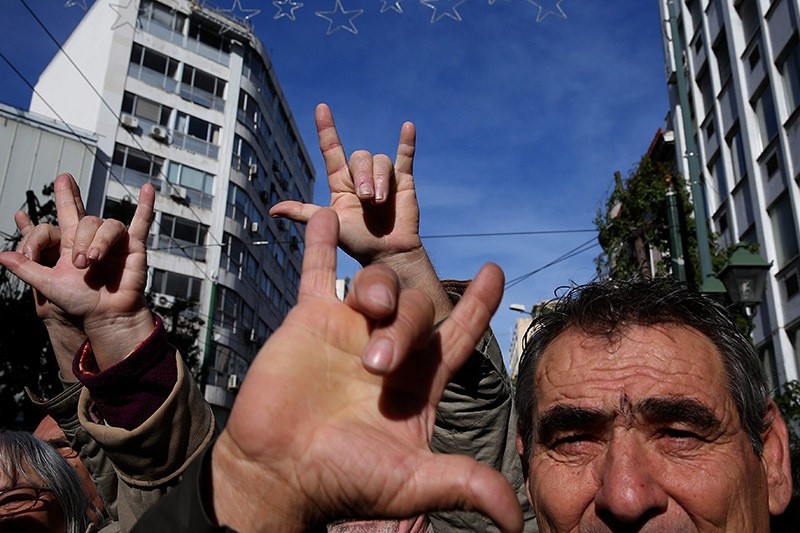 Deaf people make a gesture that in the sign language means 'Victory' as they protest against austerity measures in central Athens, Greece, 02 December 2016. (EPA Photo)
by Dec 08, 2016 12:00 am

Greeks went on strike on Thursday to protest planned labor reforms and painful austerity cuts demanded by the country's European Union and International Monetary Fund lenders as part of a crucial bailout review.

"The burden we carry is already unbearable," said GSEE in a statement, calling lenders' demands "irrational".

"The downturn must finally end," its rally poster read.

Workers and pensioners will march in central Athens later in the day. Turnout in street protests has been low since Greece signed up to a third international bailout in July 2015 after tough negotiations that almost forced it out of the euro zone.

Euro zone finance ministers said on Monday that Athens and its lenders needed to speed up the review which has hit a snag on labor reforms, including liberalizing mass layoffs and reviving collective bargaining between employers and unions.

Energy reforms and measures to plug a projected fiscal gap in 2018, when Greece's bailout program expires, are also among thorny issues in the review which may resume next week.

Prime Minister Alexis Tsipras hopes a deal can be reached by the end of the year for the country's bonds to be included in the European Central Bank's bond buying program by March 2017.

This would help Greece return to markets next year, for the first time since 2014, and eventually reduce its dependence on bailout loans. Athens has rejected its creditors' demands for more austerity measures beyond 2018.

On Monday, the euro zone granted Greece short-term debt relief, which was hailed as a success by the leftist-led government that has been sagging in polls for months.

But the news did not impress austerity-hit Greeks, who have lost almost a third of their income since the crisis started in 2009. Thousands have lost their jobs amid a deep recession. Unemployment in September stood at 23.4 percent.

In parliament, lawmakers debated more tax hikes and spending cuts as part of next year's budget, which projects the economy will grow by 2.7 percent and attain a 2 percent of GDP primary surplus - excluding debt servicing costs.

Parliament is expected to vote on the budget on Saturday.