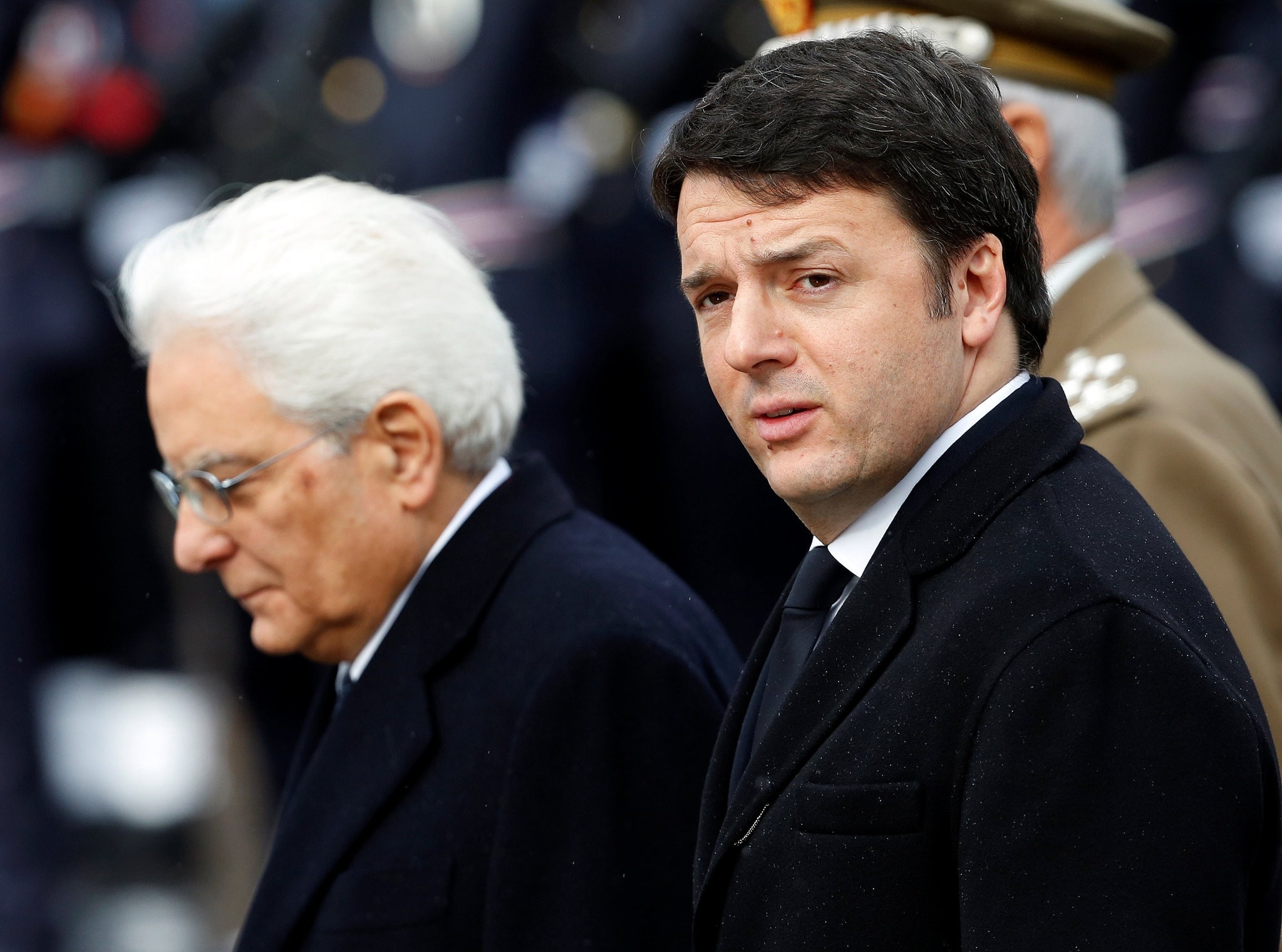 Italian Prime Minister Matteo Renzi (R) and Italy's newly elected president Sergio Mattarella as they arrive at the Unknown Soldier's monument in central Rome, February 3, 2015. (Reuters Photo)
by Dec 08, 2016 12:00 am
Italy's president began talks with political leaders on Thursday to seek a way out of the political crisis caused by the resignation of Prime Minister Matteo Renzi.

Sergio Mattarella, a 75-year-old former politician and constitutional court judge, must decide if someone can lead Italy to elections scheduled for 2018, or whether an interim government should serve until a snap vote can be held in spring.

Mattarella, a former Christian Democrat with a less interventionist style than his predecessor Giorgio Napolitano, begins talks with institutional leaders at 6 p.m. (1700 GMT) at the his Quirinal Palace.

Meetings will expand to parliamentary parties on Friday and wrap up on Saturday evening.

The process is a familiar one in Italy, which has a notorious history of government collapses, but it is the first since the Sicilian Mattarella took office last year after a career in politics which began after the mafia assassinated his politician brother in 1980.

Mattarella could wait until Monday to make his decision known, a source close to the president said. Renzi has ruled out -- for the moment -- staying on as a caretaker, a parliamentary source said.

Most parties, including Renzi's Democratic Party (PD) which holds the most seats in parliament, appear to favour an early vote, which would add Italy to a list of major European countries -- including France, Germany and the Netherlands -- facing a national ballot in 2017.

So far markets have taken Italy's situation in stride. Even Banca Monte dei Paschi di Siena, which looks likely to require government intervention to survive, saw its shares rise more than 6 percent on Thursday after it asked the European Central Bank for a three-week extension to its rescue plan.

On Tuesday, Mattarella unexpectedly dictated two conditions that delay any vote until spring: the Constitutional Court must rule on the lower house's current voting law, a decision not expected before a Jan. 24.

Subsequently parliament must draft new election rules for both houses, Mattarella said. Considering 45 days for campaigning are set aside by law, it would be difficult to hold an election before April.

The consultations will allow Mattarella to test parliamentary waters, but Renzi's majority - and his input as leader of the PD - are key to what happens next.

On Wednesday, Renzi said the PD would only participate in a government intended to last until 2018 if it was backed by all the main forces in parliament, a prospect most of them have already ruled out. Otherwise, early elections should be held as soon as possible, he said.

Mattarella is widely expected to ask a member of Renzi's cabinet, or a politician from his Democratic Party, to try to form a new government. But he might also seek parliamentary backing for a leader of his own choosing.