Paris restricts vehicles after suffering worst pollution in a decade 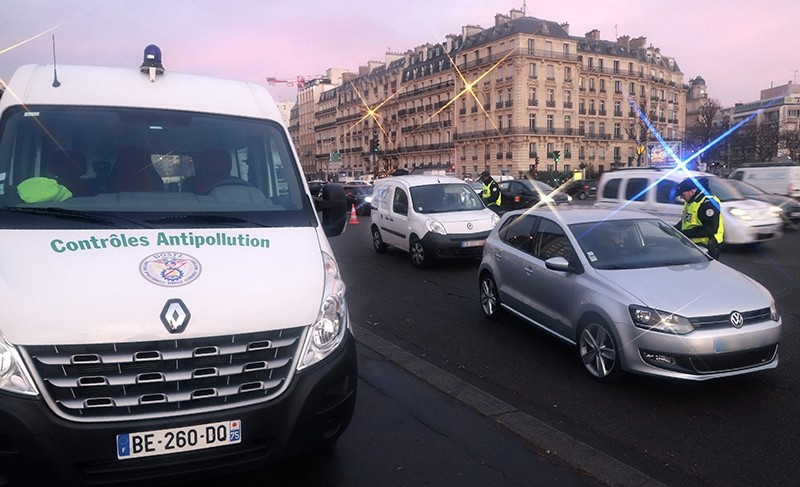 Traffic police control cars as they try to enforce the anti-pollution measures on December 8, 2016 in Paris. (AFP Photo)
by Dec 08, 2016 12:00 am
Paris has implemented limits on the number of cars on its roads after being hit by its worst and most prolonged air pollution in at least 10 years.

Local air-quality monitor Airparif said the pollution resulted from a combination of emissions from vehicles and domestic wood fires, with a lack of wind meaning the pollutants did not properly disperse.

On Tuesday, Paris implemented alternate circulation rules, allowing only vehicles with even-numbered licence plates to occupy the roads, with odd-numbered vehicles afforded the privilege on Wednesday.

Airparif classified Thursday's pollution index as "high," largely due to particulate matter - a mix of liquid and solid particles emitted from combustion processes.

Last week, the pollution index reached a high of 127. By Thursday, it had decreased to 85 - still significantly higher than the average.

Airparif said that 67 per cent of days in 2016 had registered air pollution index levels of between 25-49. Only three days in the year had registered above 100, the organization said.

The index was based on data collected from stations posted around the city.

The French Health Ministry issued warnings for elderly people and those with asthma to limit their involvement in intense sports and avoid large traffic sites at times of high circulation.
Last Update: Dec 09, 2016 12:35 am
RELATED TOPICS