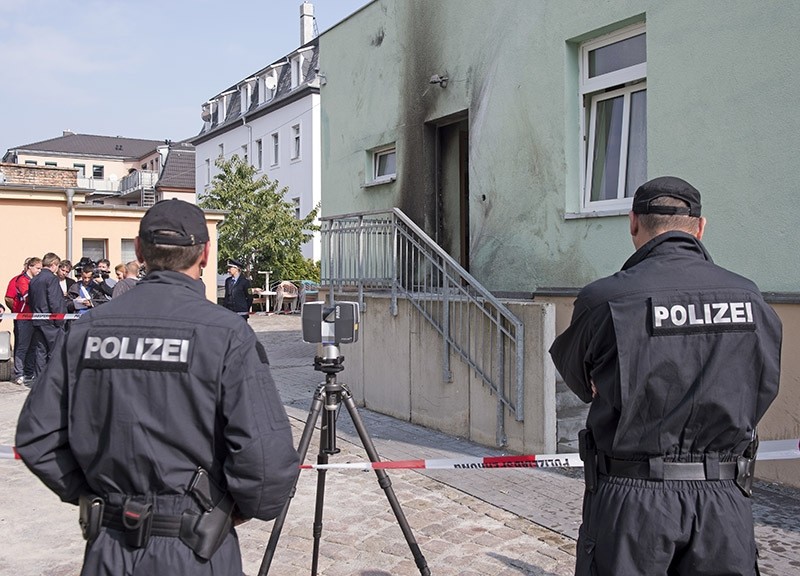 German police detained a man linked to the anti-Islamic, xenophobic group Patriotic Europeans Against the Islamification of the West (PEGIDA) on suspicion of involvement in an attack targeting a Turkish mosque and an event venue in Germany's Dresden in September.

The suspect, identified as 29-year-old Nino K. by German media outlets, was detained on Thursday, while it was not clear where he was detained.

The suspect is accused of throwing homemade explosives at Fatih Mosque, owned by the Turkish Islamic Union for Religious Affairs (DİTİB) on Sept. 26. The mosque was empty at the time of the attack except for its imam Hamza Turan, his wife and their two children, who reside in adjacent lodgings. The imam and his family escaped unharmed, but the attack left structural damage to the mosque.

Another attack minutes later damaged an international convention center, which was scheduled to host an event to mark the anniversary of Germany's reunification.

German media reports said that the suspect was a speaker at a Dresden rally of PEGIDA in the summer of 2015, where he read a letter addressed to Chancellor Angela Merkel and described African immigrants as "lazy."

Police found bomb-making material in the residence of the suspect.

Mosques in Germany, where anti-Muslim sentiment that has been accompanying the influx of Muslim refugees is rising, are occasionally subject to attacks, which range from Molotov cocktails to the tossing of pig's heads. A Turkish parliamentary committee investigating the targeting of mosques found some 297 attacks against mosques between 2001 and 2014, mostly targeting Turkish mosques. German police have been criticized for their failure in identifying the suspects responsible for the attacks.

Although a recent influx of refugees from Syria and the Middle East, two areas torn by conflicts, fueled racist attacks, Turks, who first arrived en masse to Germany as "guest workers" in the 1960s, have always been targets of attacks in Germany, including the Solingen arson attack in 1993, that killed five members of a Turkish family and the murders of eight Turks between 2000 and 2007 by a neo-Nazi gang.

PEGIDA was founded in Dresden in 2014. The far-right group staged a massive rally during the reunification celebrations, about a week after the attacks targeting the mosque and convention center. Far-right crimes have significantly increased in Dresden since 2015, potentially triggered by Neo-Nazi propaganda and right-wing populist movements that have exploited the refugee crisis and fears of Islam. The incidents of far-right violence have increased from 48 in 2014 to 116 last year, according to the advocacy group RAA Sachsen.