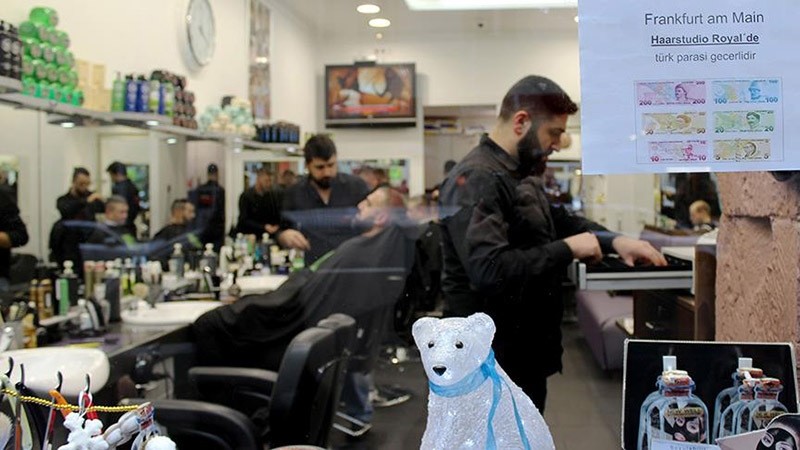 Turks in Germany are also supporting the local currency campaign launched in Turkey, by accepting Turkish liras as well as euros for their services.

Erdoğan's intervention was welcomed not only in Turkey but also in Europe, stopping the local currency's relapse. Some converted their euro savings into Turkish liras, transferring them to bank accounts in Turkey, while others, such as the tradesmen in Frankfurt, started their own pro-lira campaign.

Tradesmen on Münchener Street, where many shopkeepers of Turkish descent can be found, accept Turkish liras as an alternative payment method to euros, Anadolu Agency reports.

Adem Ayar, a hairdresser in the center of Frankfurt, hung up an announcement at his door saying "We accept Turkish lira!".

A fish restaurant owner on the same street, Vedat Elmalı, explained his decision to support the currency campaign saying: "One needed to take the first step, so that others followed. That is our aim."

Elmalı added that others should also support the "national issue", even if it is only symbolically.

The lira suffered heavily prior to Erdoğan's intervention due to global currency volatility in the wake of Donald Trump's presidential victory, as did many other currencies, particularly the Mexican peso.

The campaign to exchange the dollar also secured support among various public institutions and commercial entities, which converted their assets in foreign currencies into lira or have started to carry out transactions in the country's local currency.