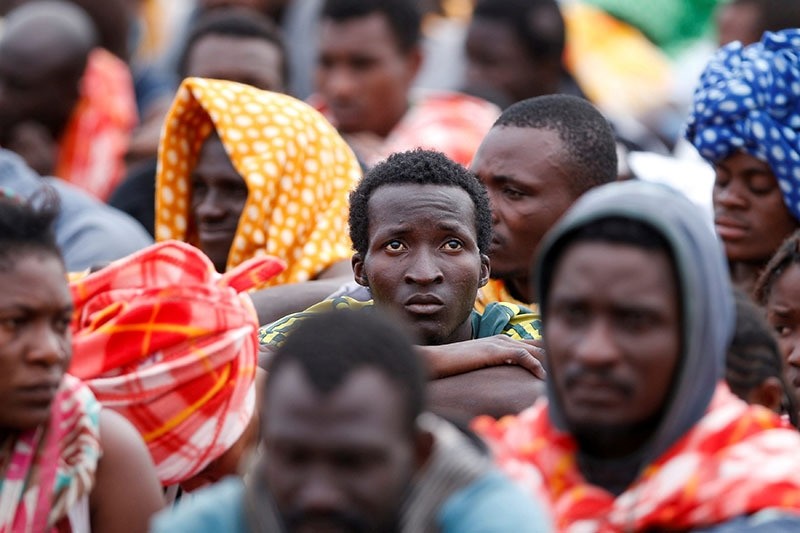 An Italian court ruled Tuesday that the captain of a migrant boat that sank in 2015, killing at least 900 people, was responsible for the disaster, the Mediterranean's worst since World War II.

Judges in Catania ordered Mohammed Ali Malek, a Tunisian national, to serve 18 years in jail for multiple manslaughter, human trafficking and causing the tragedy after the packed boat capsized after colliding with a freighter coming to its aid.

Syrian Mahmoud Bikhit, accused of being his first mate, was handed a five-year sentence for his role in the tragedy off the Libyan coast that saw Italian forensic scientists spend months sorting through decomposed body parts to count the victims.

The men were ordered to pay nine million euros ($9.5 million) each in compensation.

Both had claimed they were simple migrants and had been made to steer the boat by the real traffickers.

But survivors told investigators that Malek, who had lived in Italy in the past, was the captain. And that it was his lack of sailing skills that caused the deadly collision.

"I spent two years and six months in Italy and I have a young son with an Italian woman: I want to marry her and recognise the baby," Malek told the court in a plea before the verdict.

"It's the truth. I've always told the truth. Just as I immediately gave (police) my real name, and told them I was a passenger," he said.

The boat was carrying people largely from The Gambia, Senegal and Mali, as well as Bangladesh, the Ivory Coast and Ethiopia. Only 28 survived.

At least 850 people were packed into the 27-metre (90-foot) boat when it left Libya, according to forensic scientists who spent months examining body bags, finding that many contained the remains of more than one person.

Firefighters who recovered the mangled bodies from the rotting ship said they had been "packed in like on the trains for Auschwitz".

The Sicilian court heard from a survivor who lost relatives on the night of the April 18-19 wreck.

The vessel sank in pitch darkness after running into the Portuguese freighter King Jacob which had raced to its rescue, the collision sending its passengers over to one side and causing the vessel to tip over.

The freighter's captain, Abdullah Ambrousi, said he saw the migrant boat sailing erratically and cut the freighter's engines to avoid a crash, but the smaller vessel speed up and rammed into the King Jacob.

Malek has claimed the real captain died in the wreck and he is being scapegoated by the other survivors because he is Tunisian.

Italy's navy had the grisly task of raising the corpse-packed trawler from the seabed this year after the government promised to give the victims decent burials as a symbol of respect for all the migrants who have died trying to reach Europe's shores. The salvage cost 10 million euros.

Italian firefighters' spokesman Luca Cari said the decomposing migrant bodies were found everywhere, from the well of the anchor chain to the tiny underfloor compartment where the bilge pump sits, to the engine room.

It was clear from their positions that many had fought tooth and nail to get out when the boat rolled -- a struggle which proved futile.

Fingerprints, DNA samples and distinguishing body marks were collected on file from the corpses in the hope the data may helping relatives seeking lost loved ones.

Over 12,000 people are known to have lost their lives in the Mediterranean since the current migrant crisis erupted in 2013. Aid agencies say it is likely many more disappeared without trace after being abandoned on the high seas by traffickers.

The departures have not stopped despite the turn in the weather as winter sets in. A record number of 175,000 people have arrived on Italy's shores this year, with another 678 brought to Catania on Monday, including a newborn baby.