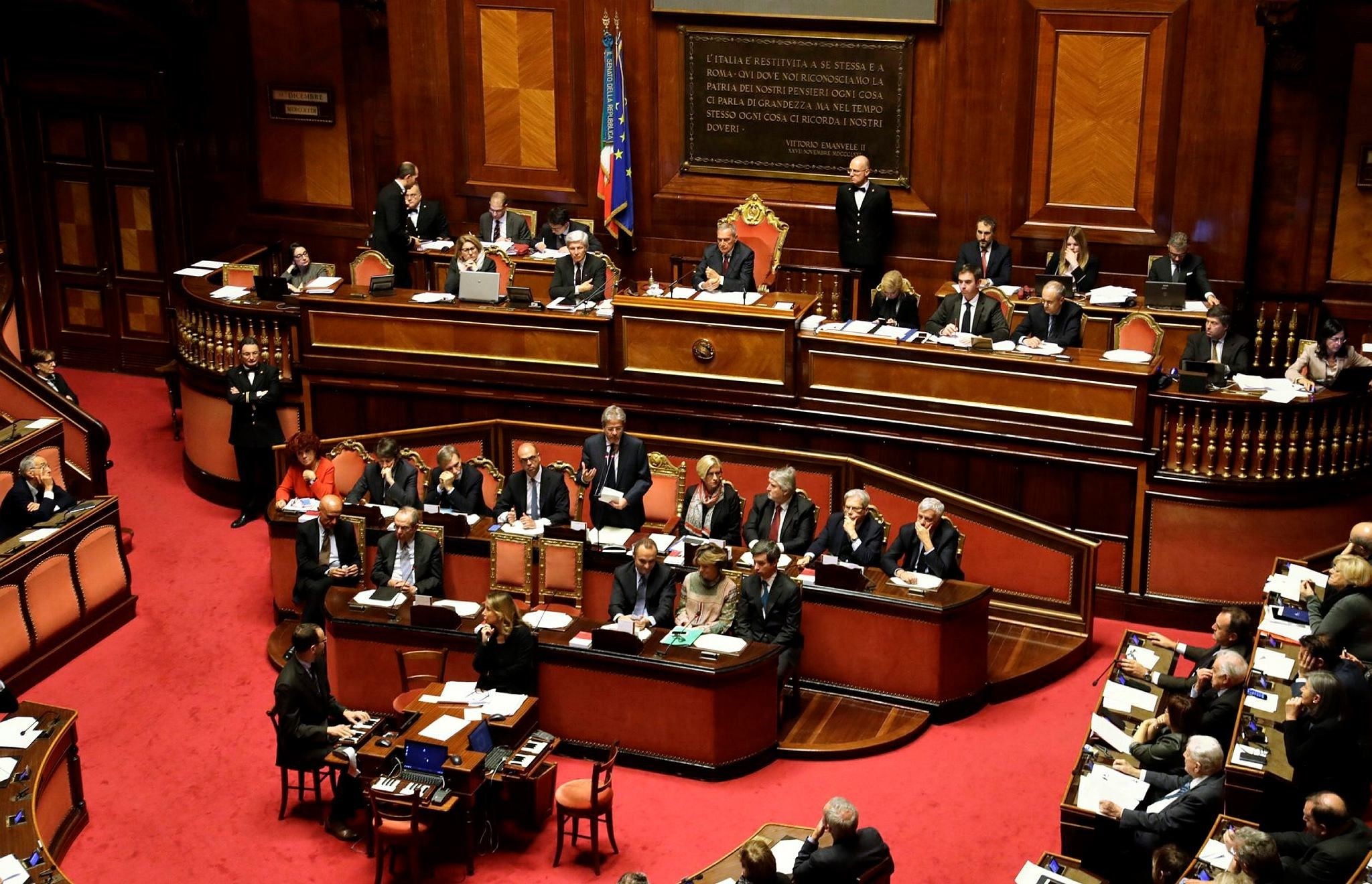 Italian Premier Paolo Gentiloni, standing at center, speaks ahead of a confidence vote for his government at the Senate, in Rome, Dec. 14.
by Compiled from Wire Services Dec 16, 2016 12:00 am

Incoming Prime Minister Paolo Gentiloni has won the backing of the Senate in a confidence vote to form his government. As the battle for the next election starts, the political turmoil in the country still persists

Italian Prime Minister Paolo Gentiloni won the backing of the fragmented Senate on Wednesday, allowing his government to formally take office as a new threat emerged to the legacy of predecessor Matteo Renzi. Italy's parliament endorsed a new government tipped to be so short-lived that its inauguration was seen as the start of battle for the next election.

Renzi resigned last week when he lost a referendum on his proposed reform of the constitution. Looking to stave off political turmoil, the head of state asked Gentiloni, the outgoing foreign minister, to form a new cabinet.

After winning an initial vote of confidence in the lower chamber of parliament on Tuesday, Gentiloni secured victory in the upper house Senate and promised to push ahead with Renzi's reform agenda. But the reform drive, once heralded by investors as a sign that Italy was finally facing up to myriad problems such as chronic economic underperformance and rampant graft, looks increasingly ragged.

With the constitutional reform already shot down by a referendum, another of Renzi's flagship projects, a shake-up of the labor market, risks suffering the same fate with Italy's main union demanding a plebiscite on the law.

Italy's Constitutional Court said on Wednesday it would review the request on Jan. 11. If it gives the green light to the CGIL union, a referendum on the Jobs Act could be held before next summer.

Business leaders denounced the move to overturn the reform, which made it easier to hire and fire workers, and the labour minister told reporters the initiative on unions made it more likely that national elections would be brought forward.

Following the referendum defeat, Renzi supporters fear the anti-establishment drive will push Italians to reject the Jobs Act. By bringing forward the national vote, the referendum would be automatically delayed by up to 12 months. "It seems to me that the prevailing attitude is to go to elections soon, before any referendum on the Jobs Act," said Labor Minister Giuliano Poletti.

A new electoral law must be drawn up before national elections can be held. In a speech to the Senate, Gentiloni said his government, which is a virtual carbon copy of the previous administration, would seek cross-party consensus on the law.

Many senators representing opposition parties left the chamber before Gentiloni spoke to protest over the make-up of the new cabinet, saying the recent referendum showed Italians did not want continuity but rather a new beginning.

The largest opposition party, the anti-establishment, anti-euro 5-Star Movement, is feeding off the popular discontent and has promised to stage major street protests in the coming weeks to push for elections. The understated Gentiloni won 169 votes in the 320-seat Senate, with 99 voting against and many opposition senators not taking part. Gentiloni is Italy's fifth prime minister in as many years and heads its 64th government since 1946. One of the first problems awaiting the new government is a mushrooming banking crisis. Monte dei Paschi di Siena, Italy's third-biggest lender, needs 5 billion euros ($5.3 billion) of fresh cash before the end of the year to stay afloat. It is widely expected to seek funds from the state to stave off collapse, bankers say.
Last Update: Dec 16, 2016 2:51 am
RELATED TOPICS