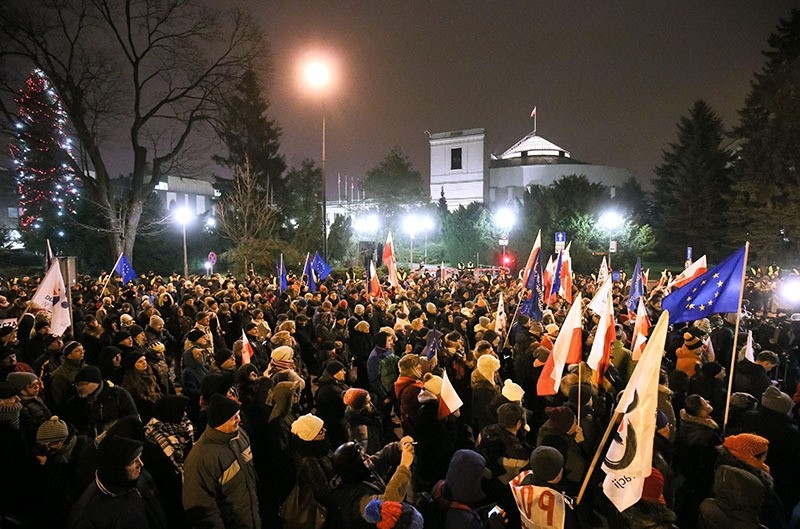 0 People take part in a demonstration organised by Polish Committee for the Defence of Democracy (KOD) in front of the Sejm (Parliament) in Warsaw, Poland, 17 December 2017. (EPA Photo)
by Associated Press Dec 18, 2016 12:00 am

Polish President Andrzej Duda was meeting separately with opposition party leaders Sunday as he tried to help solve a political crisis, while anti-government protests were planned for the third straight day.

Political tension is rising between Poland's conservative government and the pro-EU opposition over the ruling party's plan to restrict journalists' access to lawmakers in parliament.

Duda, aligned with the ruling party, expressed deep concern and has offered to mediate.

The president's spokesman, Marek Magierowski, said Sunday that a number of meetings were planned throughout the day, also with the head of the ruling party, Jaroslaw Kaczynski.

The first one was held with Ryszard Petru, leader of the Modern party.

Petru said later they discussed the media regulations and controversies around an irregular budget vote that was taken Friday, when the conflict began. The opposition is demanding a repeat of the vote.

"We are still in a stalemate," Petru said on TVN24.

Rallies supporting and opposing the government were planned Sunday in Warsaw. On Saturday, protests were held in some other cities, too.

The ruling party has increased welfare spending and still remains popular with many Poles, particularly those outside of the cities and on modest incomes.