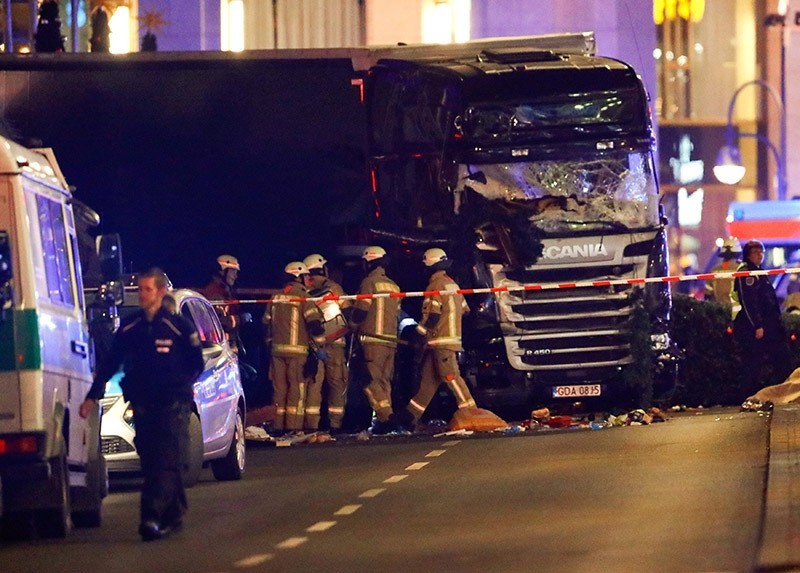 Police and emergency workers stand next to the crashed truck at the site of the suspected terror attack in Berlin, Germany on Dec. 19, 2016. (Reuters Photo)
by Daily Sabah with AFP Dec 20, 2016 12:00 am

Daesh terrorist group claimed responsibility over the deadly truck attack on a Berlin Christmas market which left 12 dead on Monday, while German police said that they have detained the wrong suspect over the attack, reports said on Tuesday.

"A soldier of Daesh carried out the Berlin operation in response to appeals to target citizens of coalition countries," Daesh's mouthpiece Amaq news agency said in a statement posted online.

German police said on Tuesday that there are doubts as to whether the Pakistani suspect detained following the deadly Berlin Christmas market attack was the driver of the truck that ran through the crowd on Monday night.

"It is in fact unclear whether (the suspect) was the driver," Kandt said during a press conference in response to a journalist's question.

The attack saw a large truck plough through a crowded Christmas market in the heart of Berlin late Monday, leaving 12 people dead and dozens injured.

A man later identified as a 23-year-old Pakistani man who registered for asylum in Berlin earlier this year was detained near the scene shortly after the incident. He has denied involvement in the attack.

"We've got the wrong man and therefore a new situation. The true perpetrator is still armed, on the loose and can do fresh damage," German newspaper Die Welt cited a police official as saying. The wrongfully detained person was released by the police later on the same day.

Another suspect, a Polish national who was a passenger in the truck, was found shot dead at the scene.

Interior Minister Thomas de Maiziere said earlier that the gun had not been recovered.

The Christmas market carnage comes less than six months after two attacks in Germany inspired by Daesh and the Bastille Day attack in the French city of Nice, which left 86 dead.

"Like millions of people in Germany, I am deeply saddened and horrified at what happened yesterday at Berlin's Breitscheidplatz," Chancellor Angela Merkel said in response to the attack.