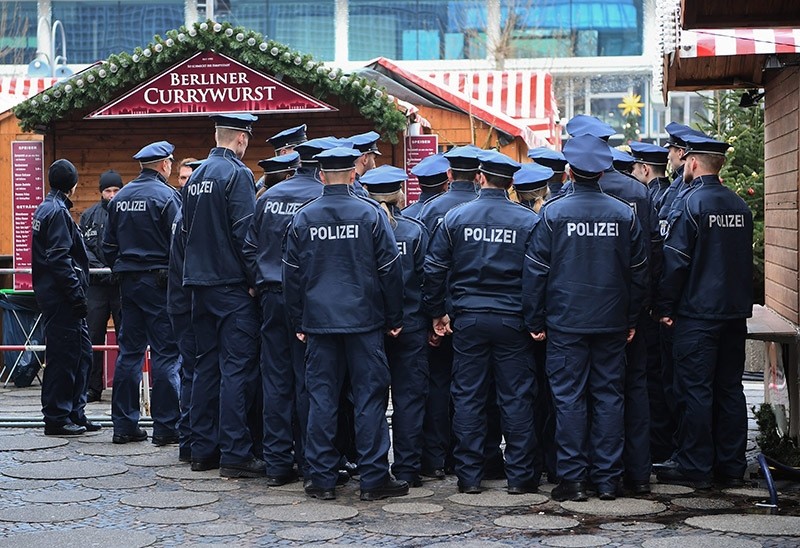 Police officers standing by a stall near the site of the attack at the Christmas market at Breitscheidplatz in Berlin, Germany, 21 December 2016. (EPA Photo)
by Compiled from Wire Services Dec 21, 2016 12:00 am

German police are hunting a Tunisian suspect in the Berlin truck attack who had been known to authorities as a potential terrorist and whose request for asylum had been denied, a security source told dpa Wednesday.

The source said that the suspect, named by German media as Anis A, is considered by Germany's domestic intelligence agency as a so-called Gefaehrder - which literally means endangerer - who is prepared to commit acts of terrorism at any time.

Meanwhile, police have began searching a shelter for migrants in western Germany where the man is believed to have lived, a newspaper said on Wednesday.

Rheinische Post said the shelter is in the town of Emmerich, which lies some 140 kilometres (87 miles) north of the city of Cologne, near the border with the Netherlands.

Regional newspaper Allgemeine Zeitung had said that the 21-year-old asylum seeker's immigration papers were found inside the vehicle and that he is known to authorities under three other aliases.

German tabloid Bild reported that the Tunisian man is registered in Cleves, a town close to the Dutch border that is in the same state.

"I am relatively confident that we can present a new suspect as early as tomorrow or in the near future," Andre Schulz of the German detectives union told broadcaster ZDF late Tuesday, adding that there was "good evidence" and "a lot of leads."

Berlin police said they had received more than 500 tips about the attack, which occurred on Monday when a large truck laden with steel ploughed through a Christmas market in a shopping district, leaving 12 dead and dozens injured.

Shortly afterwards, a 23-year-old Pakistani asylum seeker was apprehended based on a description from a witness. He was later released after no evidence was found linking him to the crime.

The RBB broadcaster reported Wednesday that another suspect had been detained overnight to Wednesday and later released due to insufficient evidence.

Joerg Radek, head of the DLF police union, told Deutschlandfunk radio that the investigation was focusing on DNA and other traces from the crime scene, an evaluation of the truck's GPS data and material found on mobile phones confiscated at the scene.

The Daesh terrorist group claimed responsibility for the attack through its official Aamaq news agency, saying that one of its soldiers had acted in response to calls to target citizens of the coalition of states fighting the group.

The Daesh often issues claims of responsibility for attacks in which it had no or only a limited role.

The German anti-immigrant group Ein Prozent said it would rally outside the Berlin chancellery at 6 pm (1700 GMT) on Wednesday, adding that Alexander Gauland and Bjoern Hoecke - senior members of the right-wing Alternative for Germany (AfD) party - would attend.

Berliner Buendnis gegen Rechts, a left-wing group, said it would rally at Berlin's Hardenbergplatz at 5 pm to commemorate "the victims and those left behind" and to protest the actions of groups "using this crime to sow seeds of hate and to divide our society."

Mayor Michael Mueller told ZDF it is "good to see that Berliners aren't intimidated" after the attack, and that the city was "standing together for our liberal life in Berlin.

"I don't think there's any need to be afraid - the police presence has been significantly heightened," he said.

Fourteen of those injured in the carnage remain in a life-threatening condition.

German President Joachim Gauck visited Berlin's Charite hospital early Wednesday to meet victims and later said that he had met a man who had been struck by a beam while aiding an injured person.

In a brief statement outside the hospital, the head of state said that he "reminded (the victims) of their innate strength."

Interior Minister Thomas de Maiziere and domestic intelligence chief Hans-Georg Maassen were speaking about security measures in the wake of the attack at an extraordinary meeting of a parliamentary home affairs committee.

The Christmas market that was targeted by the attack is set to reopen on Thursday, a spokeswoman for the Schaustellerverband fairground organization said.