Merkel under pressure over immigration policy after Berlin attack 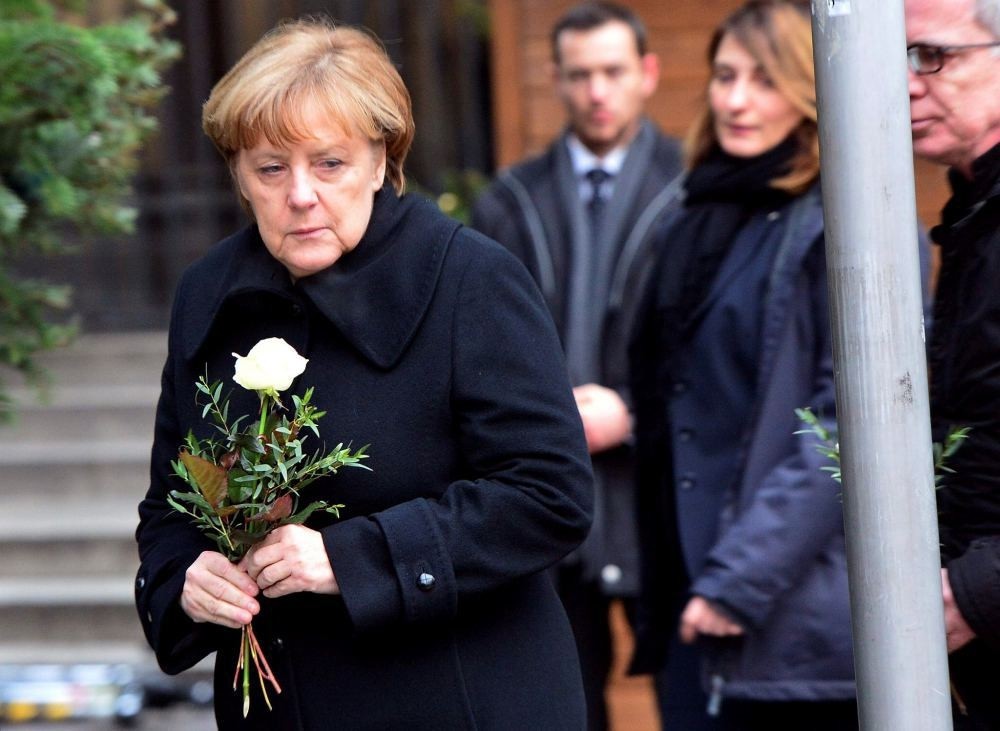 German Chancellor Angela Merkel lays flowers with German Interior Minister Thomas de Maiziere on Dec. 20 at the site where a truck crashed into a Christmas market near the Kaiser-Wilhelm-Gedaechtniskirche.
by Compiled from Wire Services Dec 22, 2016 12:00 am

After the terrorist attack on a Berlin Christmas market, German Chancellor Angela Merkel has been facing growing pressure from right-wing parties over her immigration policies ahead of the 2017 election

A lorry deliberately driven into a crowded Christmas market in central Berlin has put German Chancellor Angela Merkel's vision of an open society that welcomes refugees under pressure.

Merkel's decision last year to open the borders to refugees from war-torn countries like Syria, Iraq and Afghanistan drew global admiration, but also deep concern within Germany over whether the new arrivals could be integrated successfully.

It would be "especially repugnant" if the perpetrator was a refugee, said the chancellor, who faces elections in the autumn in which her refugee policy will take center stage.

Some politicians have blamed her open-door migrant policy for making such attacks more likely. The anti-immigrant Alternative for Germany (AfD), which has won support in the last two years as Merkel's own popularity has waned, said on Tuesday that Germany is no longer safe.

Some politicians have also called for changes to Merkel's immigration and security policies after she allowed more than a million migrants to enter Germany in the last two years, many fleeing war in the Middle East and Africa.

Bavarian Interior Minister Joachim Herrmann told German radio on Wednesday that there was a higher risk of militant attacks because of the influx of migrants.

The Monday night attack on the popular market by the Kaiser Wilhelm Memorial Church in the heart of former West Berlin left 12 dead and 48 injured — the first mass casualty attack by radical militants carried out on German soil. German security forces were still hunting for the perpetrator after releasing a man from custody for lack of evidence.

The claim of responsibility carried on the Daesh's Amaq news agency described the man seen fleeing from the truck as "a soldier of Daesh" who "carried out the attack in response to calls for targeting citizens of the Crusader coalition."

Germany is not involved in anti-Daesh combat operations, but has Tornado jets and a refueling plane stationed in Turkey in support of the coalition fighting militants in Syria, as well as a frigate protecting a French aircraft carrier in the Mediterranean, among other assets.

The claim of responsibility came not long after German prosecutors said they had released a man picked up near the scene of the attack, initially suspected of driving the truck.

The man, a Pakistani citizen who came to Germany last year, was taken into custody based on a description from witnesses of a suspect who jumped out of the truck and fled after the attack. Even before his release, officials had expressed doubt the man was behind the attack.

"We may still have a dangerous criminal out there," warned Berlin Police Chief Klaus Kandt, whose office urged people to be "particularly vigilant" and report "suspicious movement" using a special hotline.

Though Germany had not seen any successful mass-casualty extremist attacks until Monday, attempts and recent attacks in neighboring France and Belgium had made many feel it was inevitable.

Germans have been increasingly wary since two attacks by asylum-seekers last summer were claimed by the Daesh militant group. Five people were wounded in an ax rampage on a train near Wuerzburg and 15 were wounded in a bombing outside a bar in Ansbach, both in the southern state of Bavaria. Both attackers were killed.

Those attacks and two others unrelated to extremism in the same weeklong period, contributed to tensions in Germany over the massive influx of migrants.
RELATED TOPICS