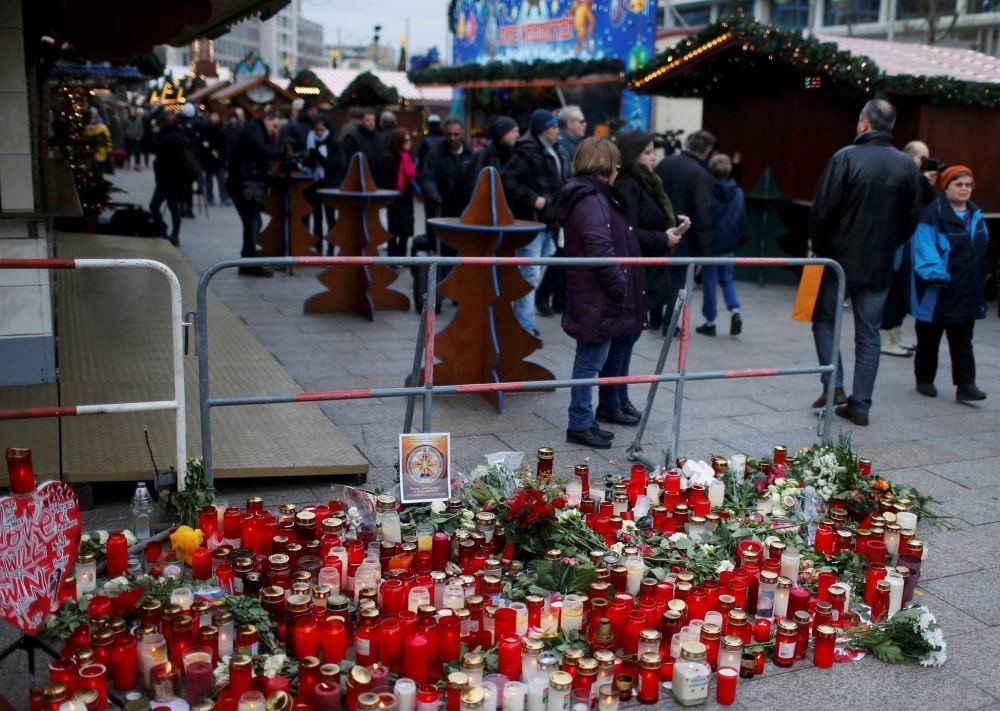 People walk through the re-opened Christmas market at Breitscheid square in Berlin, Germany, Dec. 22.
by Compiled from Wire Services Dec 23, 2016 12:00 am

Former UK Independence Party (UKIP) leader Nigel Farage, a key ally of US President-elect Donald Trump in Europe, said the attack which killed 12 people was "no surprise" and would be part of Merkel's "legacy." "Merkel has directly caused a whole number of social and terrorist problems in Germany, it's about time we confronted that truth," he told LBC radio on Tuesday.

UKIP donor Arron Banks, who was also a key funder behind the Brexit campaign, tweeted that Merkel "might as well have" been driving the truck herself.

A 23-year-old Pakistani asylum-seeker was arrested immediately after the incident on Monday after reportedly fleeing the scene but was released on Tuesday without charge.

Police said on Wednesday they were now on a manhunt for a new suspect, identified in German media as a Tunisian citizen in his early 20s who applied for asylum in April and had a temporary residence permit.

Merkel has been criticized over her decision to let in around a million migrants -- many of them fleeing war-torn Syria -- over the past two years.

"Merkel, [Dutch Prime Minister Mark] Rutte and all the other cowardly government leaders have allowed in … terror and an asylum tsunami with their open borders policy," he tweeted on Tuesday. Wilders, who heads the anti-Islam Freedom Party (PVV), also tweeted a photo-shopped picture of Merkel with her hands, face and jacket spattered in blood.

The image was not accompanied by any words, but implied she had blood on her hands for the attack.

Slovak Prime Minister Robert Fico on Tuesday said the Berlin attack had been "the last drop in the cup of patience" in Europe's migration crisis.

Matthew Goodwin, a senior fellow at the Chatham House think tank, said attacks such as the one in Berlin represented a "significant opportunity" for the "radical right" to emphasize the issue of security.

"Across much of Europe, the radical right is increasingly linking the migrant crisis to security," alongside their traditional anti-elite and anti-immigration campaign messages, he said.

Other populist forces have been more cautious, however.

In Austria, the far-right Freedom Party steered clear of making the link between Merkel's policies and the attack. France's National Front leader Marine Le Pen also made no connection.

"When there are terrorists who infiltrate themselves in a massive influx, we have the duty to stop the influx," he said, calling Merkel's open-doors policy for migrants "irresponsible".

In Germany itself, the Islamophobic and anti-immigration populist party AfD wasted no time in laying the blame on Merkel.

"The milieu in which such acts can flourish has been negligently and systematically imported over the past year and a half," the group's co-leader Frauke Petry said in a statement, in a clear reference to Merkel's decision to let in refugees.

"Germany is no longer safe. It should be the responsibility of the chancellor to tell you this. But since she won't do it, then I'll say it," Petry said, demanding "control over our territory, no ifs and buts."

Daesh has claimed responsibility for the attack in which a truck ploughed through crowds gathered around wooden huts selling gifts, mulled wine and sausages on Monday evening. It was the deadliest attack on German soil since 1980. The Christmas market that was attacked was reopened yesterday after authorities put concrete bollards around it.
RELATED TOPICS